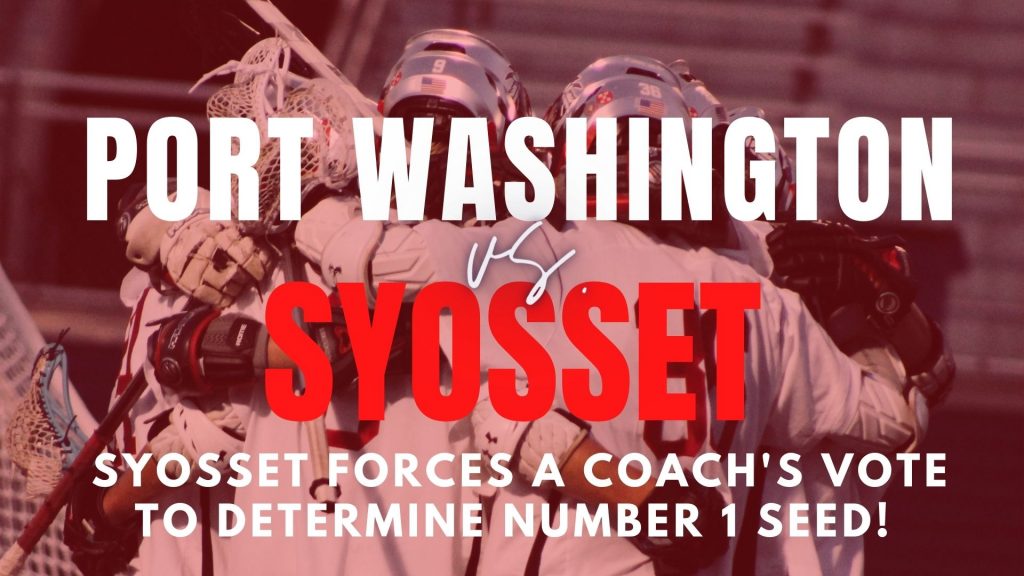 It was the final game of the regular season for both teams and a lot was at stake. A victory for Port Washington meant they get the number one seed in the Nassau County A bracket. But, a win for Syosset means there would be a three-way tie between Port Washington, Farmingdale, and Syosset which would lead to a coach’s vote to determine who claims the top seed. It looked like Port Washington was going to win the game and finish at the top after jumping out to a 4-0 lead in the first quarter. However, a second quarter surge by Syosset saw them take the lead which they would not relinquish en route to a 12-10 victory. Here’s how they were able to get the victory!

Port Washington dominated the first quarter. Both teams were held scoreless for the first four minutes, but a save by Patrick Kenny of Port Washington led to the Vikings going the other way, and Jensen Weingard scored to give them a 1-0 lead. Later in the quarter, Weingard scored again as he flashed one through from the right side of the cage to add to the lead. The next two goals for the Vikings came in a blink, as Jared Morales whipped one through from 12-meters deep. Then, Luke Meyer scored a goal that was assisted by Henry Haberman. The Vikings offense was rolling and they headed into the second quarter with a 4-0 lead.

Syosset’s offense had been held in check in the first quarter, but they looked like a completely different squad in the second. Daniel Garone got the Braves on the board, coming around the corner on the left side of the cage and putting one through. Shortly after, the duo of Adam Giovinco and Nick Accardo cut the deficit to 4-2 when Accardo found Giovinco right in the front of the cage for the goal.

The sharing continued for the Braves with Matt McPhee dishing it off to Ethan Colter who shot while turning around in mid-air! The equalizer came with just over two minutes left in the first half. Stephen DeStefani went coast-to-coast and flashed one through. The second quarter was winding down but Syosset wasn’t done scoring yet. They scored two more times to cap off a six goal quarter.

Garone scored his second of the game, and Joseph Bueti got on the board with an assist from AJ Alexander to give them a 6-4 lead. It looked like they would go into halftime up by two, but Anthony Bellomo helped force a huge turnover and found Haberman down the field to score with one second left. The Braves led the Vikings 6-5 at halftime.

The third quarter started with a bang, as Luca Accardo won the opening face-off and sprinted down the field uncontested to score and give Syosset a 7-5 lead. Later in the quarter, Devin Lefkowitz added a goal to put Syosset up by three. The Vikings needed an answer to stay within striking distance and they got two timely goals in a hurry to cut the deficit to one.

Andrew Robinson had an absolute stinger making it 8-6, and Haberman scored amidst Syosset’s tough coverage to make it 8-7. Momentum seemed to be in Port Washington’s favor, but Alexander had a huge answer for Syosset to put them back up two going into the fourth.

Port Washington struck first in the fourth to bring them within one, as Weingard ran on the right side of the field and flipped a pass to the opposite side to Jacob Shorr who put it in. The Vikings knocked on the doorstep multiple times in the second half, but Syosset seemed to always have an answer. The Braves scored three consecutive goals to take their largest lead of the game in the closing minutes.

The run started with Colter scoring his second goal of the game which was assisted by by Nick Accardo. Then, Accardo took matters into his own hands and added a goal making it 11-8. Garone capped off the run by recording a hat-trick, putting the Braves up 12-8. Port Washington was running out of time, but they weren’t done yet. Weingard added two more goals in the span of just over a minute, brining him to four on the day. Unfortunately for the Vikings, time ran out on them and Syosset came away with a monumental 12-10 victory to force a three-way tie in the standings!

Syosset closed the regular season with a 10-2 record along with Farmingdale. Port Washington ended the regular season 9-3, but with the head-to-head records between the three teams being even, they are all tied up and a coach’s vote will decide who gets the coveted top seed. Comment below who you think will be number one after the vote!