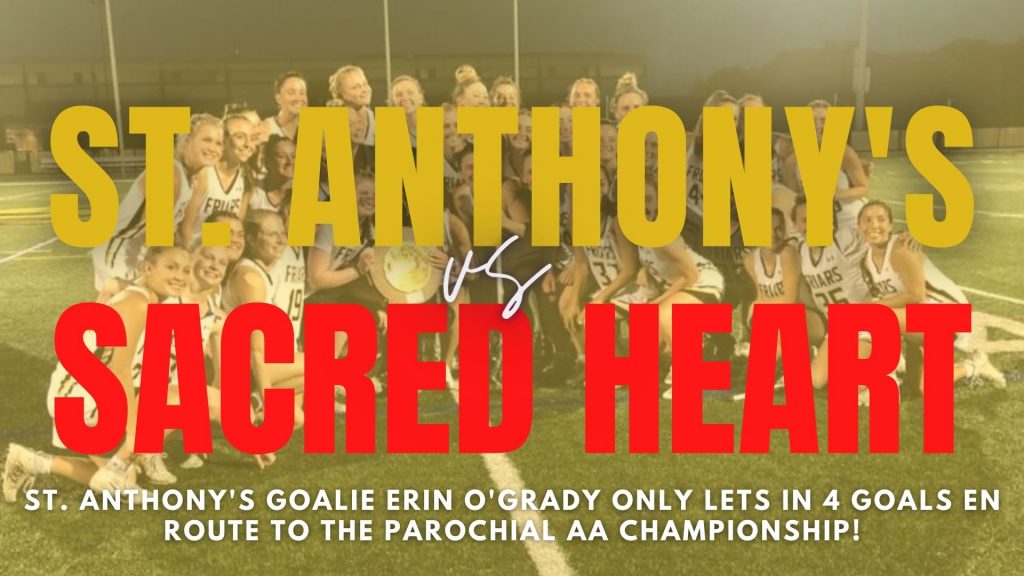 Sacred Heart and St. Anthony’s took the field in hopes of winning the Parochial AA Championship on Tuesday. The Friars looked to cap off an undefeated season while Sacred Heart attempted to spoil the party and take the home the title. However, St. Anthony’s did not let that happen. They jumped out to a lead in the first half and never looked back as they cruised to a 14-4 victory. Their offense seemed to get contributions from everyone, and their defense was led by their goalie Erin O’Grady who was a brick wall in the net. Let’s look at how they were able to claim the title!

Defense led to offense for the Friars to start the game. O’Grady made the stick save to keep Sacred Heart off the board, and St. Anthony’s marched down the field where Ava Biancardi scored off of an assist from Kathleen McAteer. One minute later, Tanner Scarola scored on a free-position shot and gave the Friars a 2-0 lead. Then, Rose Christie added to their lead, scoring right from the center of the cage to go up three.

Sacred Heart had a chance to make it a 3-1 game, but were swiftly denied by O’Grady. St. Anthony’s once again took it the other way and Kate Licciardi stung one through to extend the Friar lead to 4-0. With just under eight minutes elapsed in the half, Sacred Heart’s Kyra Browne got them on the board with a free-position  goal. Later in the half, the Sacred Heart defense forced a turnover on O’Grady which they capitalized on as Scarlet Cifarelli scored, bringing them within three.

This was as close they would get in this one. The Friars ended the first half scoring four unanswered goals. A sweet pump fake by Tess Calabria on a free-position shot froze the defense and she found the back of the cage to make it 6-2. They proceeded to get three more goals from Abby LoCascio and a second from Scarola to cap off a dominant first half and go into the break with a 9-2 lead.

Once again, the Friars struck first in the opening minutes. Meredith McPharlin scored on a free-position shot to extend the lead to 10-2. Sacred heart came back with two consecutive goals to cut into their deficit. Browne scored the first one as she ripped it through for her second of the game. The next goal was scored on a free-position shot by Grace Lane who somehow snuck the ball past O’Grady.

O’Grady went on to keep Sacred Heart out of the net for the rest of the game. With just over eight minutes left, Sam DiCarlo snuck one through the legs of the goalie bringing the score to 12-4. Later in the half, Scarloa scored her third goal of the game for the hat-trick! The Friars got one last goal in the final two minutes from McAteer which was an absolute laser for the teams 14th goal of the game.

The game ended the way it should have, with O’Grady notching one more save in the closing seconds. St. Anthony’s defeated Sacred Heart 14-4 to cap off the undefeated season winning the 2021 Parochial AA Championship! Congratulations on a tremendous season girls!