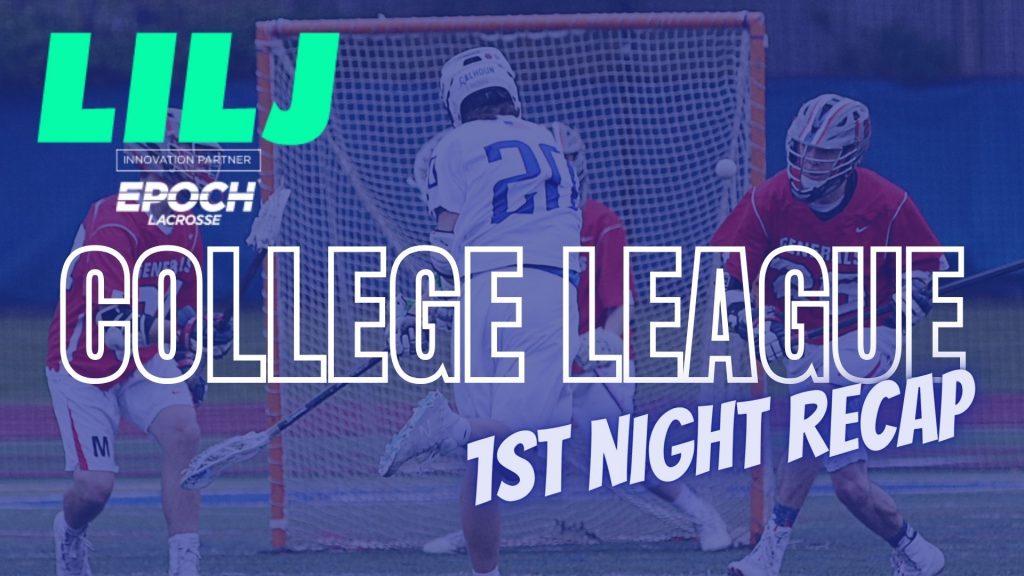 The LILJ College summer league kicked off last night for both the men and the women. For many players, it was the first time that they’ve taken the field in a competitive game since some players did not have a college lacrosse season. The long layoff for players didn’t seem to show, as the games were filled with lots of action and great talent. Here’s a look at the final scores from the first night and what some of the players had to say about getting back on the field and what their college experience has been like so far.

X-Team defeated Ligma LC 12-4, the Firecats defeated Pinney Droppers 8-4, and the Sharks beat Hot Boys summer 7-6. The LILJ caught up with the Epoch Players of the game from each of the winning teams. They discussed how it felt to get back on the field along with their experience at college. Anthony Mazzella of X-Team who plays collegiately at Rensselaer Polytechnic Institute (RPI) said it felt great after not having played in a long time.

“It felt great, it’s been a long time. Last time I played was in March when covid hit so it feels good to get back out there and play.”

He said that his experience playing lacrosse in college has been awesome so far.

“Its been awesome. The game really speeds up once you get to the college level and I’m just really excited to get back out there in the fall.”

Connor DeSimone of the Firecats plays at Johns Hopkins said it was an amazing experience after also not playing in quite sometime.

“It’s been a while. It feels awesome getting out here with the guys, having a lot of fun and getting the legs back just running up and down the field a little bit. I had a great time today, it was a lot of fun and we’re just happy that the Firecats could get the win.”

The Sharks player of the game was David Sanzone who played at Nassau Community College and now plays at Adelphi. He was happy to be back out on the field after losing the final game of the college season.

“It feels great, coming off of a loss in our Adelphi season, it’s great to get back out there with the boys.”

Playing at Adelphi, his goal is to win a conference championship and a national championship.

“We have great coaches, great teammates and we’re really grinding hoping to win a conference championship and a national championship.”

Team Q’s Gabby Sartori, who plays at Brown University, talked about bringing back those friendships with players across Long Island.

“It’s just super fun to rekindle relationships with people on Long Island again. It’s definitely great to be out here after not having a season. I thought I’d come in cold but the just the thrill of competition and having fun really made it worth it.”

Sartori’s college experience and connection with her teammates has allowed her to not focus on the outside noise.

“The college experience has been great. Definitely just having more camaraderie with the team is making covid or any outside noise that much smaller, and just the opportunity to continue to play lacrosse especially at great school like Brown is all I can ask for.”

Katie DeSimone of Legacy and current Duke Lacrosse player was happy to be out there after wrapping up her freshman season of college.

“It feels really good, after a really fun college season it’s so good to be back out with some of our travel friends and friends from home and we had fun out there.”

After a great freshman season at Duke, DeSimone can’t wait to get back out there next year.

Claire Morris of Sharkuteri and goalie for Ohio State earned player of the game honors recording four saves and only giving up one goal.

On Monday, June 28th the remaining two teams in the men’s league will be in action with Team Wave going up against Y-Team.