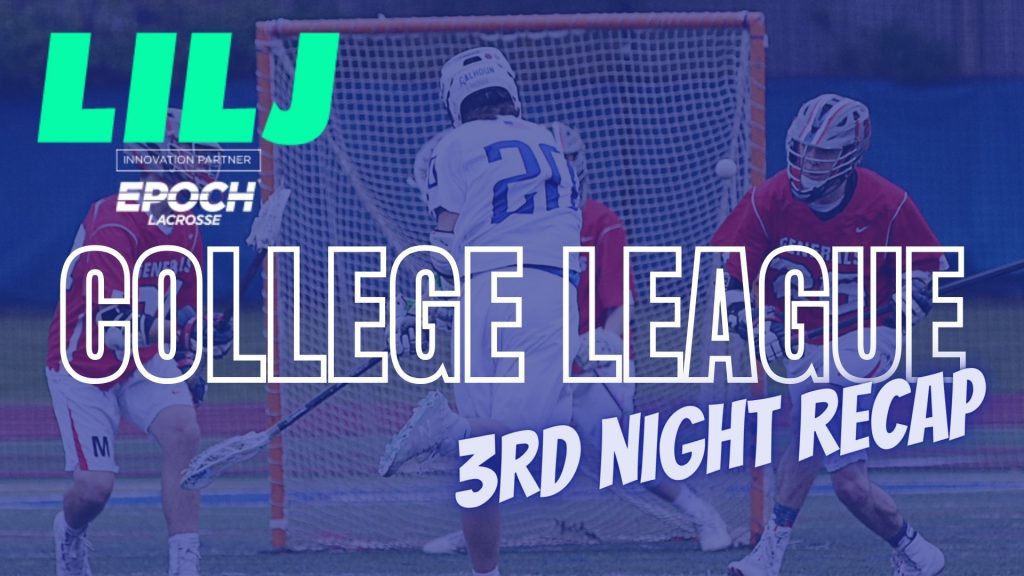 It was a full night of action on Wednesday night with six games taking place. We had a little bit of everything as we had some games that went down to the wire, some games that weren’t as close, and a few teams remained undefeated on the season. Here are the recaps of how each game went down!

In the first game of the evening, Hot Boys Summer defeated Y-Team by a score of 13-5. 10 different players score goals for Hot Boys Summer, with Rocco Barbero leading them with three, and Steven Germain with two. Eight other players scored a single goal en route to the win, and goalie Liam Daly recorded four saves. Jeffrey Atlas led Y-Team with three goals, and goalies Angelo Colonna and Sean Wallace combined for 11 saves. Hot Boys Summer is now 1-1 while Y-Team falls to 0-2.

The second game of the night featured Ligma LC against FireCats with Ligma LC getting a narrow 7-6 victory. Steven Pinto had three goals to lead the team, and four other players each scored one. Jason Baratta, Matt DeMeo, Zach Pizz, and Matt Schneider got on the board. Goalie Andrew Pinto notched eight saves to help secure the win. On the other side, Tyler DeSimone led the team with three goals, followed by Marc Psyllos with two, and Luke Eschbach with one. Josh Blatt and Ryan Erler combined for seven saves. Both teams now have a 2-1 record on the season.

The late matchup featured undefeated Team Wave against X-Team. It was a big win for Team Wave who remained undefeated after getting a 12-2 victory. Vince Dalto had a team high four goals followed by Morgan O’Reilly with two. Six other players scored one goal in the win. Anthony Mancino had eight saves for X-Team in the loss. Team Wave is now a perfect 3-0 on the season while X-Team dropped to 1-2.

Team Q  squared off against Team M in the first game of the night. It was an easy win for Team Q as they came away with a 13-5 win. They had four players score multiple goals with Gabby Sartori leading the way with four. Jeilinne Bonilla, Jennifer Gaffney, and Desiree Kleberg had two goals in the game. Marina Skelly, Rachel Weber, and Brooke Zarou each scored one goal. The ground ball department was led by Sophia Iacinno who had three. Team M was led by Rachel Janis with two goals, and got one each from Kendall Fressle, Molly Hughes, and Kelsie Worth. The win for Team Q means they remain undefeated with a tie on the season, now with a record of 2-0-1. Team M drops to 0-2.

The second game of the night featured Legacy against Sharkuterie. Legacy was victorious in this one, winning the game 8-5 to remain unbeaten at 2-0. Katie DeSimone had a team high three goals, and Maddigan Miller added two. They also got one goal from Maggie Clark, Kristen Scheidel, and Chrissy Thomas. Sharkuterie was led by Hailey Daleo with two goals. Olivia Arnsten, Casey Choma, and Kate Muulham all scored once, and Claire Morris notched five saves. Sharkuterie has played three games and has a record of 1-1-1.

The third game was definitely the most competitive among the three. Team L and College Laxers battled right to the end. College Laxers came from behind to get a 10-9 victory over Team L. They were down by a goal in the last few minutes and scored two late goals to secure the win. Caitlin Dellecave and Isabelle Vitale each scored three goals to lead the way. Paige Vegna also added two ground balls. For Team L Melissa Esswein, Hannah Heller, and Emily Heller each scored twice. Emily also added two ground balls and one caused turnover. College Laxers moves to 1-1 while Team L drops to 0-2.