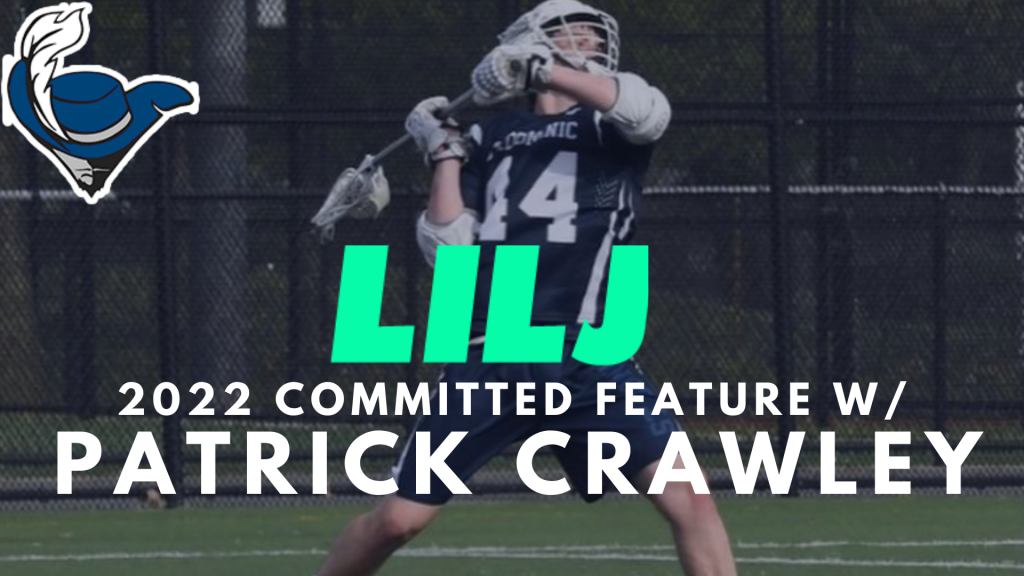 Patrick Crawley is all about making the right decisions for himself to have the best experience possible, on and off the field. The senior attack at St. Dominic’s is looking to win one more State Championship before heading off to Cabrini University next year where he will play Division III lacrosse.

He describes his experience at St. Dominic’s as “unbelievable.” He transferred there in January of his junior year from Port Washington and moving from public to private school in the middle of the pandemic, he did not know what to expect.

He knew some of the people on the lacrosse team there through previous fall tournaments, and they were there to guide him through what St. Dominic’s was all about. He said that all the kids there have been awesome and, “it’s like I made a second family.” Compared to Port Washington, St. Dom’s truly accepted him for who he is, and he has made so many great friends there. In fact, he has made more friends in six months than he ever did at Port Washington in two and a half years.

In preparation for his senior season, Crawley is lifting four to five times a week. He also gets work in with the stick two to three times a week, since there are a few tournaments coming up in the fall on Long Island. “I just want to get ready and set the tone for my team,” he said.

He started playing for his club team, Long Island Express, his sophomore year of high school for Mike Chanenchuk’s team. “What I really love about Coach Chanenchuk and his team is every single one of the players on the team are amazing on and off the field.” As we can see, Crawley has surrounded himself with great teammates and great friends the past few years in both aspects of his life, and he knows he’ll continue to do that at Cabrini University.

He had got gotten some calls from some Division I and Division III schools, but there were several reasons that he chose Cabrini in the end. The head coach, Coach Colfer, recognized what he can do on the field and how he is a great teammate off the field. They want him to compete year in and year out for championships.

He visited the school this past June and thought the campus was beautiful and all the people walking around campus he just knew were nice, welcoming people. Crawley currently has his own sports podcast and is considering studying journalism or communications. “I knew this was the right fit for me academically and athletically and I’m going to love it when I get there.”

His favorite memory from his lacrosse career was winning the Class A State Championship Catholic League this past year. Up 13-3 in the fourth quarter with ten minutes left, a lightning delay caused some confusion, but ultimately, they were declared the winners. “I know a bunch of kids on the team were there for the first championship in 2019 when I wasn’t so I know how much that meant to them and I’ll never forget it as long as I live,” he said.