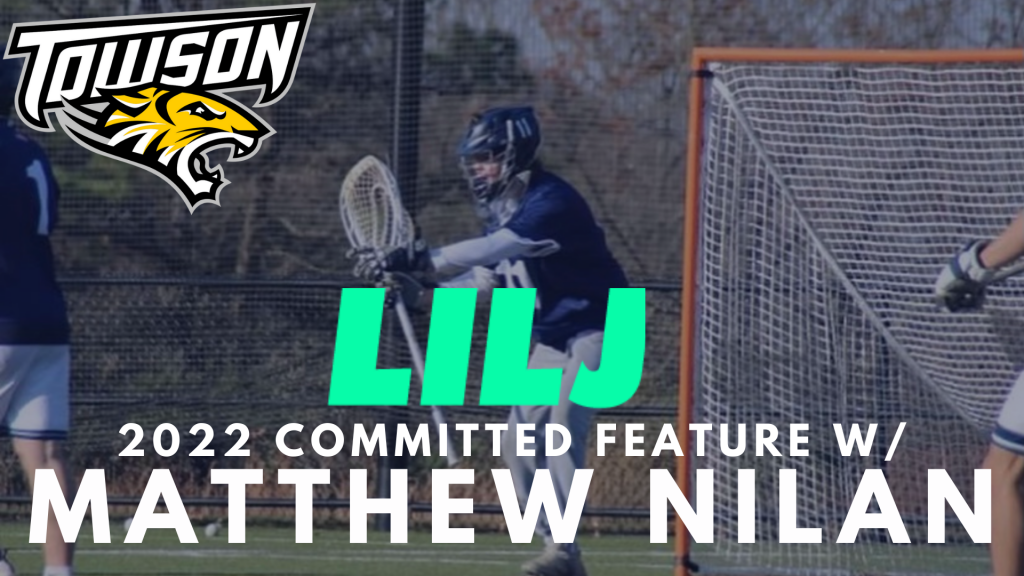 Matthew Nilan is a senior goalie at Bayport-Blue Point High School currently preparing for his senior season and future collegiate career. He will be attending Towson University next fall and play Division I lacrosse.

Nilan’s lacrosse career started at a very young age, and since the start he has always played in the net. When he arrived at middle school and got into the competitive scene, he knew he wanted to play at the next level. “Bayport is more fun than any other lacrosse experience I’ve ever had,” he said.

They unfortunately lost their sophomore season due to the pandemic, but he was grateful to have played this past spring. He is already looking forward to getting back on the field and playing games every week. “It’s crazy because it feels like lacrosse season just ended and I just want to get right back into it.” He said it’s a great experience playing at Bayport-Blue Point (BBP) because the school is small, and they have a tight knit group of players who just love lacrosse and love to play it together.

One of his favorite lacrosse memories is winning an overtime playoff game with his varsity team. He also loves being on the sideline and building those relationships with his teammates. Nilan loves every part of the game and has never taken those memories for granted.

He has had the pleasure of playing with some of his teammates for at least seven years now, one of his closest being fellow senior, Cole Henke. With only four seniors for Nilan’s class including himself, they have gotten very close and have experienced a lot together. They are always around to train and help improve one another.

Head Coach at BBP, Coach Meehan, has been with Nilan since he got to high school. It is known that coaches usually don’t give goalies much attention, but in his case, “They’ve definitely taught me how to play a team and lead a defense ever since I was a freshman. So, I would definitely say that they’ve shaped my leadership skills more than anything else on the field.”

Since it is currently off-season, Nilan is making sure to get shots on him anytime he can. Once some of his teammates are out of their fall sports season, they plan to play as much as they can in the winter. The high school team lost a lot of experienced players from last year, but he believes they have a young core group that is going to step up and really help the team.

His club team, United Lacrosse, is a unique, close group of guys just like his high school team. He has played for Coach Josh Marksberry since seventh grade and is saddened that he will no longer get to play there. He thanks his coach for shaping him into the player he is today.

All the well-known, big club teams like 91 and Legacy have multiple teams per grade level, however there is currently only a 2022 team for United. They are now starting to expand as a club, looking to shape more players and prepare them for the next level. “It’s awesome to see them starting a new program with younger grade levels, because they’re the type of team that takes kids on that may have been outcasted from their better team and then builds them into players that they know they can be,” he said.

The summer of sophomore year is supposed to be big in terms of getting looks from coaches, which he unfortunately missed out on due to the pandemic. This made his junior year even more important from a recruitment standpoint. On September 1 of his junior year, he made a list of all possible schools he might want to attend and ranked them 1-10 on how good of a fit it was for him.  He wanted a bigger school, not too far from home, with a great business, accounting, and finance field.

He said it was a patient and long recruiting process for him because no other schools really jumped out to him, and he only started speaking with Towson this past July. His mentality through it all was to email as much as possible, keep working on highlights, and just continue to get better on the field- and if you’re good enough, they’ll see it.

“I was ecstatic when I could finally commit there because it’s a big weight off your shoulders when you’re looking forward to something like that for so many years,” he said. The biggest lesson he learned throughout his journey was to be patient and trust the process. If you put 100% in, you’re going to get 100% out. He encourages prospective college athletes to work hard, don’t feel bad for yourself, and just do everything you can to accomplish your goals. He accredits these lessons he learned to Coach Marksberry from United Lacrosse.

Nilan is extremely excited to get to Towson University. He is especially looking froward to meeting the rest of his recruited class and reconnecting with former BBP teammate, Shane Santora. “I’m just excited to meet those guys on the team and become part of that.”