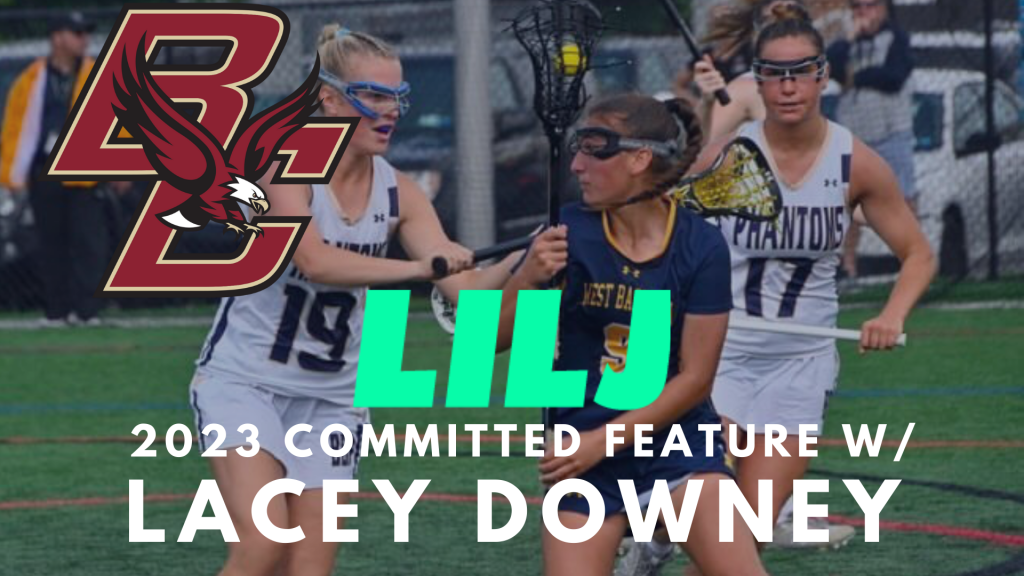 Lacey Downey has committed to further her academic and athletic career at Boston College, home of last year’s NCAA Division I National Champions. She will continue to be an eagle in the fall of 2023, but still has two more seasons at West Babylon where she hopes to lead her team to another Suffolk County Championship.

Downey started playing lacrosse in kindergarten and has her two older sisters, Kayla and Ellie, to thank for getting her into the sport. She got to play on her sisters’ team and learn the game with them. She also noted them as her role models. Kayla currently plays at Coastal Carolina University and has always taught her how to get better. Ellie plays at SUNY Oneonta and has always been Lacey’s biggest supporter.

Downey said her experience playing at West Babylon is probably one of her best. “It’s a great atmosphere with the coaching. It’s not all about lacrosse, it’s about having fun too,” she said. The West Babylon eagles beat Eastport- South Manor in the County Championship this past spring. She was grateful to have won that trophy with her older sister and it is one of her favorite memories from lacrosse. West Babylon is losing six seniors from their team but one of their best players who missed last season due to a torn ACL will be returning to the field.

Downey is a three-sport varsity athlete as she plays field hockey in the fall and basketball in the winter. Since she is currently in season for field hockey, her training schedule for lacrosse is not as busy. She still trains every Monday night and a lot with her high school coach and travel team to stay ready for the spring.

Downey previously played for Long Island Top Guns but last year came to play for Long Island Jesters. “It was just the right fit for me. My high school coach is the director of the program and Jerry Caramelli, I really like his coaching philosophy.” Although Downey got more recognition from her high school team for her accolades, her travel team is where college coaches really got to see her play.

Going into the summer before September 1st, Downey felt the stress of trying to play her absolute best at every tournament. She was constantly emailing coaches, going to camps, and trying to decide where her future will lie. “I’m so grateful for the coaches that reached out to me, but it was just a lot to handle.” Her final decision led her to Boston College, for a few reasons.  BC is known for their high level of academics, where she plans to major in biology or health science with the goal of attending PA school. The school is near the city of Boston which also appealed to her. The coaching staff, in her words, is unmatched. And the team won the National Championship last year, something Downey would love to accomplish during her collegiate career.

Her advice to aspiring college lacrosse players is to not take it so seriously because then it won’t be fun. She encourages athletes to play other sports and not to put everything into lacrosse. She is very excited about attending Boston College for reasons bigger than athletics. She is looking forward to making memories with the team and making a lot of new friends in the next chapter of her life. “Although lacrosse is important, it’s also about having fun.”