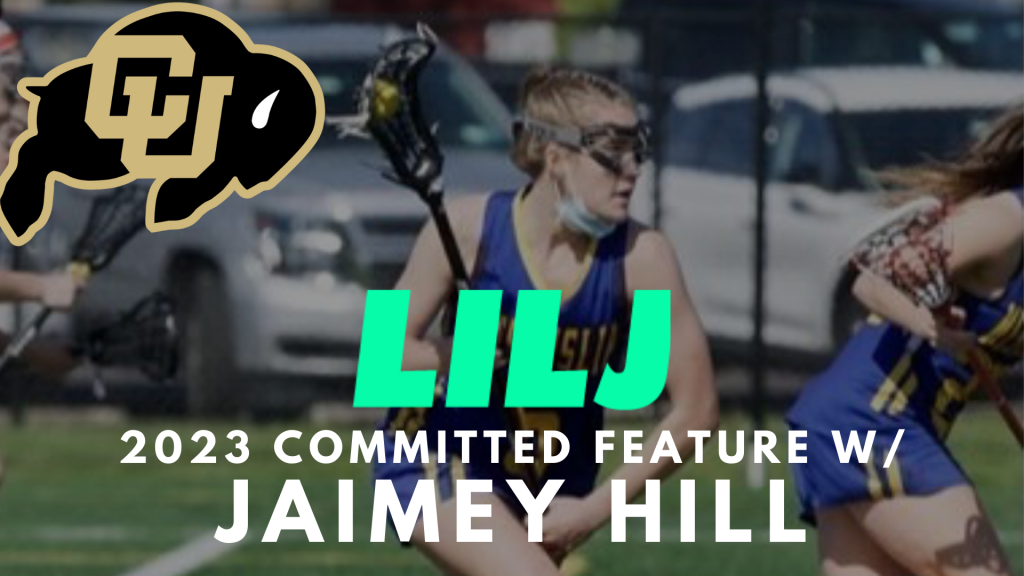 Jaimey Hill has committed to University of Colorado Boulder where she will pursue her degree and play Division I lacrosse starting in the fall of 2023. After a great first spring season at West Islip high school, she is looking forward to her next two seasons where they will continue to compete for a State Championship.

Hill started playing lacrosse in around first grade and was lucky enough to have her dad as her coach. Her siblings also played so she was always surrounded by the game. She said that her older sisters inspire her as a player and have had the biggest impact on her as a player and a person. They helped to teach her the fundamentals of the game starting from a young age. Once she saw how far she could go, she decided to take the next step and actively look to play at the collegiate level.

She spent her freshman year of high school at St. John the Baptist High School but transferred to West Islip for her sophomore year. She felt it was a better fit for her socially and athletically. She played her first year on the varsity team under head coach Joe Nicolosi. “It was the greatest experience I’ve had by far.” She said they had a really good season and is excited for what’s to come. “I’m just really excited to help out,” she said.

In preparation for the spring season, their team is participating in an indoor lacrosse league in order to keep playing with each other and keep their sticks in their hands as much as possible. Hill said she also tries to play with her travel teammates and put in individual work as much as she can. She also hopes to continue connecting as a team off the field. Their main team goal is to compete for a state title. Individually, she wants to help out in any way she can.

Hill has played for Legacy Lacrosse since about sixth grade and is very happy that she transferred over to her current team. “You could just tell the connection with the coaches and the girls was just so special.” She loves to play there and is dreading the end of her club career.

Her recruitment process started in the summer where she started to find what she was looking for in her future school. She described her process as stressful, but she knew she was not the only one going through it and she found a way to enjoy it along the way. She wanted to go somewhere where she felt truly wanted. When she stepped on the campus at Colorado, she knew it was the place for her. It felt like home.

It was quite the flight from Long Island, but “once I got there, it seemed like it was all worth it.” She said this was the school she was dreaming for and although it is farther than she originally planned, she knows it is the right fit for her.

Hill’s advice to other players starting their recruitment process is to not rush it. Just because everyone around you seems to be committing, don’t rush your process and risk making the wrong decision. She is most looking forward to the campus environment and experiencing what it’s like to live on her own. The team seems so close, welcoming, and loving and Hill hopes to make an impact on the team and on the field. “I hope I can grow as a person and grow as an athlete.”