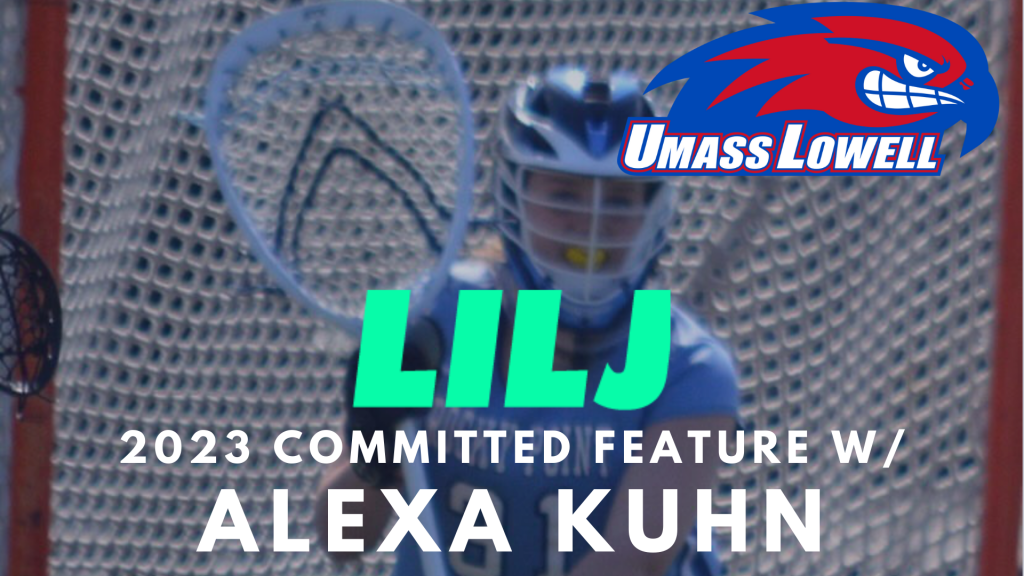 Alexa Kuhn has committed to her new home, University of Massachusetts Lowell, where she will further her academic and athletic career. Before she becomes a Riverhawk in the fall of 2023, she has the opportunity to lead her team in net for two more seasons at Rocky Point.

Kuhn has played lacrosse for nine years now and knew she wanted to continue her career at the collegiate level in sixth grade. She noted her mom as her inspiration in life, but her athletic inspiration is Lauren Daly, former Boston College lacrosse goalie and one of her first trainers. She said Daly made her feel confident and ready that she could play at the next level.

Last season, Kuhn was the second-string keeper behind her teammate who now plays DI lacrosse at Drexel University. Kuhn said she was super proud to watch her but now that it’s her time to shine, “I’m super ready to step on the field and win games for my team.” Rocky Point lost to Comsewogue last season in the first round of playoffs, so “I’ve been training really hard so that Rocky Point can go even further this year,” she said.

In preparation for the spring, she has been going to physical therapy and training to get her body conditioned and ready for the games. A lot of the girls on her high school team play field hockey together during the fall season but they also meet at the field occasionally to practice and train as a team. Kuhn is doing offseason conditioning and working on her stick skills as well. Her individual goals for the season are to have lots of goals saved, to have great stats, and to have a clear mindset every time she gets scored on. One of their team goals is to communicate more on defense.

Kuhn plays club lacrosse for the Long Island Yellow Jackets, and this will be her fourth season. She has made some of her best friends there and is so happy she can watch them commit to their dream schools just like she has. On September 1st, she got lots of texts and calls from a variety of coaches. “I’m just super grateful for what I got,” she said. One of those texts came from head coach at UMass Lowell, Coach Lisa Miller. Their first phone call together came the next day and she said they really connected during their first conversation.

She visited campus and immediately fell in love with it. However, she made sure to explore all her other options before making her final decision. The day she got home from her other visits she called Coach Miller and arranged to bring her whole family up to campus that weekend. When Coach Miller asked what her decision was, she did not need any more time to think it over. She knew UMass Lowell was set to be her home for the next four years.

Throughout the recruitment process, she got a lot of help and support from both her high school and college coaches. “My two head coaches, Coach Tim and Coach Thorne, they’re just amazing. They were super supportive throughout this whole process, and I just couldn’t imagine it any other way.” Her high school coach and LI Yellow Jackets director were both contacted by UMass Lowell for their interest in Kuhn, so those connections furthered her journey to her ultimate commitment.

Kuhn described UMass Lowell as feeling like her second home. She quickly bonded with the coaches and was grateful for all their help in figuring out the recruitment process. The girls on the team who assisted her during her unofficial visits were also very welcoming. “They made me feel like family before I even committed, which is amazing.”

Kuhn plans to major in nursing with a minor in psychology and hopes to become a pediatric nurse practitioner in the future. UMass fit all her needs as a student and as an athlete, but she also felt that it was the right fit for her as a person. Her advice to players looking to get recruited is to take your time. There is no need to rush it. Make sure your find that all-around connection.

Kuhn plans on accomplishing a lot during her time at UMass. She spoke about becoming an All-American and helping rebuild the program to compete for an American East conference title. “We’re going to go in and we’re going to be winning these big championships. I’m just super excited to be a part of that.”