Posted on December 3, 2021 by Mia Sansanelli 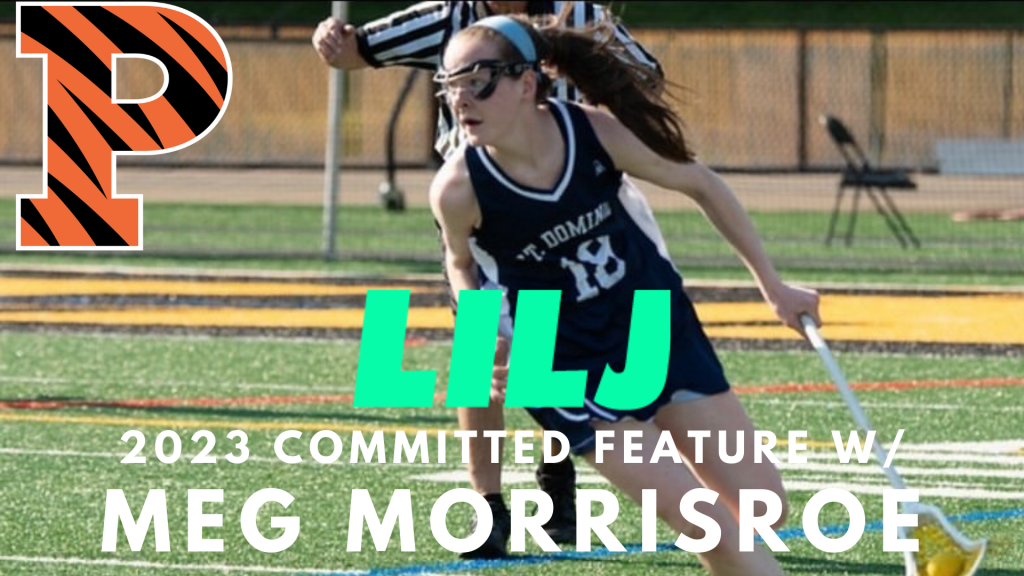 Meg Morrisroe has officially committed to Princeton University where she will pursue her degree and her lacrosse career at the Ivy League level. After winning the League Championship with St. Dominic’s last spring, she has two more seasons to help her team get back to the playoffs before playing at the Division I level.

Morrisroe started playing lacrosse in kindergarten and her first coach was her mom. She grew up watching her sister play and once she started playing herself and watching games at the college level, she knew she wanted to strive to play collegiately.

She described the team environment at St. Dominic’s as very supportive. “Even though I’ve only had one full season there, we’ve made the most out of our time and we really wanted to get better every day so it’s just a great environment,” she said. Part of the reason she chose to attend St. Dominic’s was because of how much she liked the coaches and the feel of the program.

In preparation for the spring season, Morrisroe is trying to stay busy on top of playing both a fall and winter sport for her high school. She tries to get outside and hit the wall whenever she can and watch film as well. Her lacrosse team set the goal to win the league last spring, which they achieved. For this season, they want to set the same goal and continue to work hard towards it. Personally, she plans to set a small goal every day and she also hopes to lead by example.

Morrisroe plays club lacrosse for Team Elevate and is going on her sixth year with the team. “It’s been really fun especially because it has been my team since forever. I’ve got to see all my teammates grow together and figure out how each other play.” And now, they get to watch each other commit to their dream schools.

Due to Covid-19, recruitment for the 2023 class got set back. This made the past summer very busy and very important for Morrisroe and her teammates. She did not want to rush anything, but when she saw Princeton and spoke with the coaches, she really felt that it was the place for her. The school provides lots of opportunities for her now and in the future.

Morrisroe feels that both her high school and club teams pushed her to be her best. The supportive environments of her teams encouraged everyone to get better. Her high school coach, Christina “Espo” always sends Morrisroe inspirational texts whenever she needs them and has gone through the recruitment process herself. She is always there for her, and it is nice knowing that she always has someone in her corner.

One of the appeals of Princeton is its close proximity to Long Island which makes it easy to visit home and for her parents to come to the games. She is not sure what she will be studying yet, but everything that the university offers academically and athletically made the difference for Morrisroe. She is looking forward to watching the team play this year since they haven’t been able to recently.

“All the girls there have something really special and the team environment when I visited- I could just tell that everyone really loved each other and wanted each other to get better.” She has been fortunate to have had similar team experiences during her high school career, and she loves that she has found a college program that has the same atmosphere.

Her advice to players looking to play collegiately is to trust the process and to not compare yourself to anyone else. Everyone’s process is going to be different, so stay true to yourself.