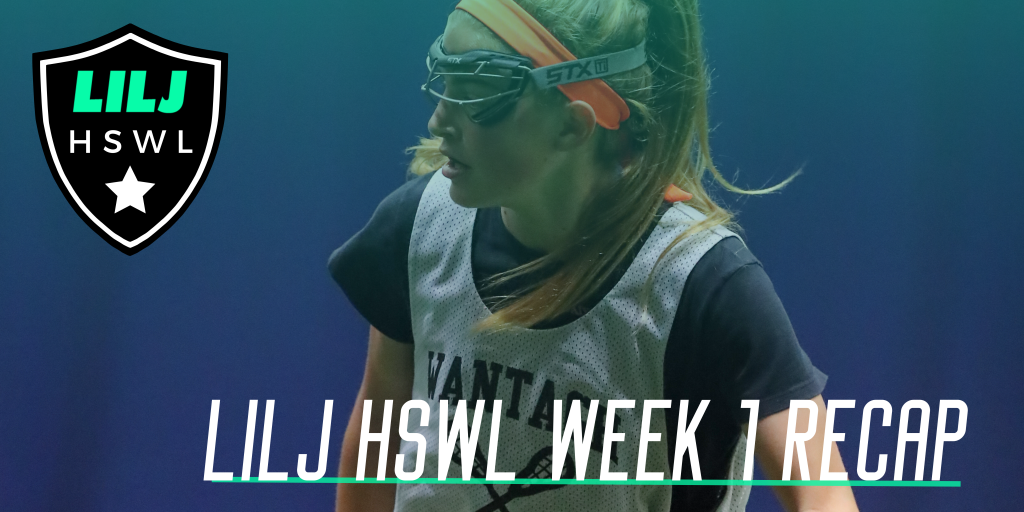 The first week of the the LILJ High School Winter League was nothing short of epic. There were great games across the board, and some great individual performances throughout the day. In total there were eight games in the girls league, including the Epoch Game of the Week which featured St. Anthony’s and Comsewogue. After each game, The LILJ chose an Epoch player of the game from the winning team, sometimes more than one if there were multiple standout players. Overall, it was just great to see the players back out on the field having fun and getting the competitive juices flowing in preparation for the spring high school season. Here’s a deeper dive into each individual game.

The opening game of the league was a battle between two Suffolk Class C teams in the Mustangs and the Buccaneers. This game saw Mt. Sinai cruise to a 15-6 win in this one. They jumped out to an early lead and never looked back. Three of the stars for Sinai were Alexa Spallina, Lea Floebeck, and Taylor Cline, all of which earned Epoch Player of the Game honors.

It didn’t take long for Sinai to get on the board. Floebeck assisted to Kayli Carannante less than two minutes into the game. Spallina gave the Mustangs a 2-0 shortly after with a goal that came box lacrosse style. Carannante and Ryan Kearns both set down picks setting up the opportunity for a Spallina stinger. The score jumped to 7-0 before Islip got on the board. Caitlin Barnes fired a missile from just inside the 10 yard line for Islip’s first goal. By halftime Mt. Sinai had comfortable 9-3 lead.

The second half was much of the same with the Mustangs dominating the time of possession. Their offense just had too much firepower for the Buccaneers to keep up. It should be noted that they have a very young team as opposed to Mt. Sinai who’s team is mostly upperclassmen. Floebeck and Spallina continued their rampant scoring, including one goal by Floebeck where she was able to shuffle the crease and put it through. Cline dominated the game on both sides of the floor, and Sinai took home the win.

Game two saw the Patriots of Ward Melville go against the Bulls of Smithtown. This one was a nail biter but it was Ward Melville came away with a 9-7 win. Both teams traded goals to begin the game, with Ward Melville getting on the board first with an Ava Simonton goal, followed by Grace Theofield dishing it inside to Nikki Menella.

The Bulls grabbed a 2-1 lead with Isabella Danutono faking and face-dodging to the cage for the go-ahead goal. But after that Ward Melville outscored West 5-1 the rest of the first have to take a 6-3 lead going into halftime. Two of those goals came from sophomore Amelia Pirozzi who was the Epoch player of the game along with freshman Ava Simonton.

West was able to keep it close in the second half as they outscored Ward Melville 4-3. However,  the balanced attack that Ward Melville had on the field as well as goalie Ava Carillo making timely saves was just too much for them to overcome. After the game the LILJ caught up with two Epoch POG’s Ava Simonton and Amelia Pirozzi for a postgame interview.

This matchup between SWR and Westhampton was a tale of two halves. The Wildcats from Shoreham got off to good start and had a two goal edge going into the break, but their offense stalled in the second half thanks in large part Westhampton’s goalie Maya Farnan.

The beginning of the game saw both teams alternate the first four goals of the game. One of which came from Maddison Pieloch of the Wildcats who pushed it in transition and took it through three defenders for the finish. Shoreham went on a 3-1 run the remainder of the first half. Brooke Meltcher played a role in not letting the Hurricanes get good looks offensively, causing turnovers and being part of a smothering ride that Wildcats had going in the first half.

The Hurricanes flipped the script in the second half, outscoring Shoreham 8-2. Their senior All-Long Island midfielder Olivia Rongo got things going, shredding through the Wildcat defense and stinging one in the bottom left corner. They followed that up with another stinger from Reese King coming off the quick feed by Ava Derby. They added one more to take their first lead before Reese Marcario came back to even it up at 6. After that it was all Westhampton. Outscoring the Wildcats 5-1 the reminder of the game. Shoreham didn’t lack opportunities, but Maya Farnan was a brick wall in the second half and stopped just about everything that came her way. Ultimately Westhampton came away 11-7 winners with Farnan being the epoch POG with 14 saves.

This was a matchup between one of Nassau County’s elites in Wantagh, against one of the best freshman club teams in the country in YJ Spallina. Wantagh was shorthanded in this one, missing two pf their top players, Eva Ingrilli, Erin Whitaker, and Madison Taylor. YJ was able to take advantage of that and get a 17-8 win.

They got contributions from a number of players including, Aubrie Eisfeld, Alexa Spallina, Erika Kreuscher, and Aubrey Maurer. They were attacking from both the right and left side of the field and jumped out to an early lead 8-0 lead. It wasn’t until about six minutes into the game when Wantagh finally got a clean possession to work with. Wantagh did chip away at the deficit with  Madison Alaimo quarterbacking their offense, but the in the end it was too much for them to overcome. Alaimo however, did have a GLE Top 10 Play in the second half, beating the shot clock with a goal.

The epoch player of the game went to Erika Kreuscher, who finished with two goals, and two gb’s, making things happen on both sides of the ball. Aubrie Eisfeld ended finishing with a game high six goals. Madison Alaimo tallied seven points from the eight goals scored by Wantagh.

The first Epoch Game of the Week definitely lived up to the hype. The Friars and Warriors took this one down to the wire. Comsewogue appeared to be the better team in the first half, getting production from juniors Mia Fernandes, Gabby Constant, and Alyssa Deacy. A surprise was eighth grader Jayla Calendar who scored twice and had four gb’s. Definitely a player to be on the lookout for in the future. Despite being the better first half team, St. Anthony’s hung around and ended up going into halftime tied at six after falling behind 5-2.

The Warriors gained a two goal lead again, but the Friars had an answer thanks to their stud sophomore Tess Calabria. Tess has the ability to change the tide of a game in a blink and that’s exactly what she did in this game. She answered right back going coast to coast in transition to bring the deficit back to one. With game tied and just over two minutes left, Alexa Spallina (playing for St. Anthony’s) threaded the needle to Calabria for what was the go-ahead goal. Comsewogue was unable to come up with answer and the Friars went on to win 11-9 after a late insurance goal by Spallina.

Calabria with a game high five goals, as well as leadership and her ability to run the offense, earned her the Epoch Player of the Game.

Game 6 was a showdown between the Colonials and the Eagles. This one was never a runaway, but Rocky Point was in control for most of the game. This team has some young talent in the likes of Cadence Adamo who is only a SEVENTH grader and was tied with Grace Curtin for a team-high four goals. Definitely someone who will be on the 2027 LILJ watch-list.

Adamo helped the Eagles jump out to a 3-1 lead with a stinger to the top right corner. She followed that up with another goal after intercepting the clear by Willam Floyd and scoring. By the end of the first half she had three goals for the hat-trick. Her and Curtin combined for 5 of the seven first half goals for the eagles who led 7-2 at halftime.

William Floyd looked to make second half adjustments, moving Allison Filosa from defense to midfield, but they were still unable to chip away at the deficit. Rocky Point thew double teams at Kayla Gimore to make other players run the offense which made it tough for them to get many opportunities to score. Grace Curtin scored two more goals for Rocky Point and in the end they managed to get an 11-5 win. One positive for William Floyd to take from the game is the dominance that Kayla Gilmore had on the in the draw circle. She took six draws and won every one of them. The Epoch Player of the Game went to Curtin for her four goals and one assist.

This was the second game of a double-header for Islip,  going against the second squad for Bayport. This game could have been called the “Erika Kreuscher game”. She absolutely dominated in this one. Bayport took the game 13-7 and of the 13 goals, Kreuscher was responsible for 11 of them. She assisted on four goals, and scored seven. One of her seven goals even made the GLE top 10 plays with a low-to-low stinger to the back pipe!

Islip certainly did their best to hang around in the game. They got two goals each from Caitlin Barnes and Avery Falco. Barnes also did a very good job in the draw circle, winning three of the six that she took. Islip was just unable to match the offensive force that was Erika Kresucher.

Defensively, Bayport’s goalie Shannon Alden did a great job in the net. She finished the game with 12 saves, and was a key factor in Islip not being able make a push to get back in the game. The defense of Alden and Kreuscher’s offensive explosion got co Epoch POG’s.

The defending champs were in action for the final girls game of the day. They took on the YJ Wiener club team and came away with a 14-9 win. This Bayport team showcased just how deep they are. It was the trio of Hayden Eisfeld, Katie Clare and Mairead Kelly combining for nine goals, but they weren’t the only ones who had a hand in this win. Margaret Kennedy, Ava Mean, and Mikaela Mooney combined for eight points, and Natalie Fabrizio had four assists and a goal to take home the Epoch Player of the Game.

They were also backed by their all-start goalie Felicia Giglio who is one of the bets goal tenders on the island. In one half of action she notched seven saves and only allowed three goals.

The Yellow Jackets are a team of sophomores from all over the island and certainly put up a good fight. Tess Calabria led them with three goals, and Jenna Soto also had a very nice all around game with two goals, two assists, and three gb’s. The champs were just a little too much for this YJ squad to come back against.