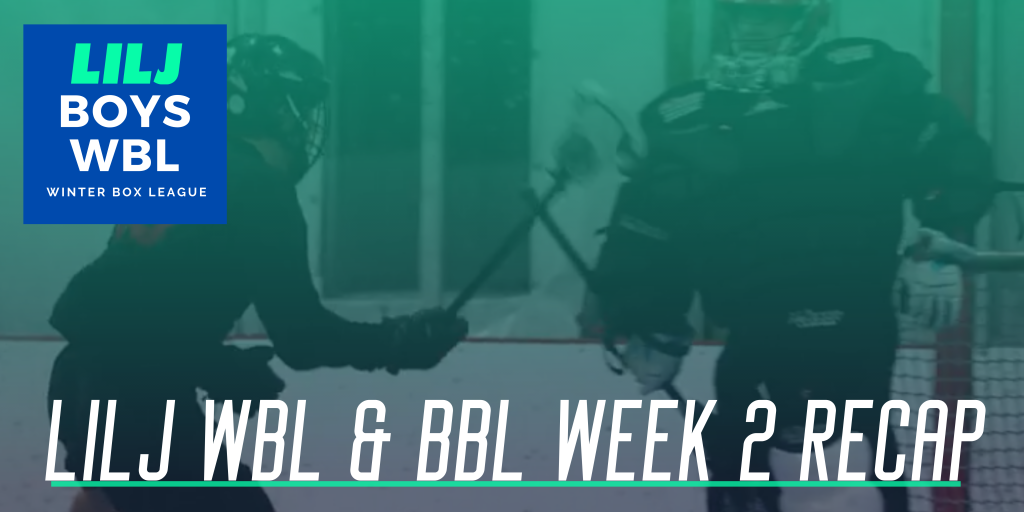 The second wee of play in the boys box league had some very close games take place in the high school division. The Jr. Riptide team narrowly defeated Syosset Winter Red, and Bing Bong got a close victory over Syosset Winter Black. In the bantam division the games weren’t as tightly contested, but there were still some great individual performances. Let’s jump into how each game was decided.

The first game of the day between Trainwreck and Turtles was a 12-3 victory for Trainwreck. Nolan Hopper had a game-high three goals, and JonCarlo Carbone and Matthew Constable each scored twice. Caden Cullen was in the net for Trainwreck and recored 10 saves while only allowing three goals. Four different players also recorded multiple ground balls to help them earn the win and improve to 2-0.

Express was able to earn their first win of the season, defeating Igloo 10-4. A collective effort is what got the job done for them in this game. William Schwarz was tops in points with five. He scored twice and dished out three assists. Dean Pelzzi also scored three times, and Brayden Robertiello scored twice and scoped three ground balls.

The young gun squad for Syosset put up a valiant effort against Bing Bong but came up just short. Bing Bong earned a 13-10 victory for their second win of the season. CJ Reilly scored five goals and had three ground balls which were both a game-high. Max Hawkinson and and Ryan Monfort each had three goals and Mike Leo scored twice. Syosset was led by Nate Edwards who had three goals and Jake Cohen recorded nine saves.

This game went down to the wire saw plenty of lead changes but the Jr. Riptide team edged out Syosset 15-13. The Jr. Riptide team had big games from Jayden Finkelstein, Kyle Lewis, Anthony Munro, and Adrian Nowak. The four of them al had four points each in what was a big offensive showing overall. Despite the loss for Syosset, three players scored multiple goals, and Jake Cohen recorded 14 saves which gave Syosset an opportunity to win the game.