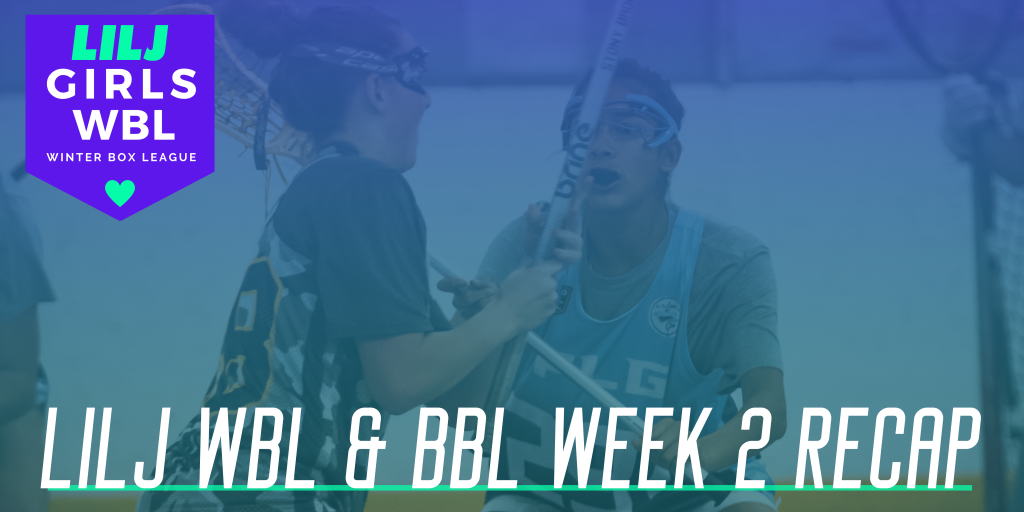 The second week of the winter box league featured some extremely high scoring games both in the high school league and in the bantam league. It was a big day for the FLG 26 and 27 Navy team in the bantam league and in the high school league, South Side, Long Beach, and Manhasset picked up big wins, and the newly created Team Pink got a win in their first game. Here’s how each of the games were played out.

Navy picked up a big win over white, defeating them 28-7. Caitlyn Gilmartin recorded 10 points, posting five goals and five assists. Her teammate Samantha Van Gelder also had an amazing game, finishing with nine points, scoring eight times and adding one assist. Navy also got a stout game by goalie Megan Caputo who recorded 11 saves. Some standout performances for the white team were Holly Chase and Chiara D’Angelo who combined for three goals and eight ground balls.

Tradition earned a quality win over the Blue Devils by score of 17-8. A multitude of players helped them earn the win, led by Michaela Molgano who scored five goals. Ciara Hegarty and May Paisley also scored three goals each. The Blue Devils’ Olivia Zehil had a very solid game with three goals which was a team high. Despite the loss, their goalie Julia Hipperling finished the game with 13 saves.

This game saw a great offensive showing from navy. They were victorious 14-1 thanks to a huge second half. Isabella Fiorelli and Madeline DiRusso combined for seven goals and eight points to lead the way. Four other girls on FLG Navy 2027 contributed with two points each in the win.

Game one in the high school league was a well played game by the Spartans who defeated Liberty Black 17-7. Nine different players scored for them with Frankie Gray leading the squad with four goals. One of the nine players that scored included goalie Caitlin Boden who took it out of the box herself and put one through the pipes! As for her performance in the net, she had an amazing game, tallying 18 saves and only allowing the seven goals.

South Side Winter vs. Liberty Black 2025

South Side came away with a 15-7 win over Liberty Black on the backs of Mia Delmond, Hailey Ferraro-Reich, and Caitlin Haggerty. The trio combined for 10 points and the strong start that they got off to in the first half was enough to give them a win. South Side’s goalie Mackenzie Creagh finished the game with 10 saves. On the other side, Liberty Black’s leading scorer was Victoria Ottomanelli who had three goals.

Long Beach put on an offensive clinic in their win against FLG Winter. They posted 21 goals which was the most of any team in the high school winter box league that day. Delaney Radin and Ava Main had monster games for Long Beach. Radin scored six goals and dished out five assists, and Main scored four times and added three assists. The duo of Sarah Gusler and Emily Backlin split the goalie responsibilities and teamed up to record 19 total saves.

Team Pink played in their first game in week two after just being assembled by sophomore Tess Calabria. The team is a collection of talent from different parts of the island. In their first game together they picked up a big 18-8 win over Garden City. Calabria had an insane game that may go down in the history books. She scored 10 goals which is the most that anyone has scored in the box league. Pink also got a great all around game from Lauren Perfetto. She had five points and three ground balls. Garden City’s top performer was Marie Cacciabaudo who had five assists and one goal.

The final game of the day was a great performance by Manhasset who beat YJ Swarm 17-9. The big three for Manhasset was Caitlin Barrett, Annalisa Massaro, and Alex Morton. Massaro finished with four goals and three assists for seven points and was a ground ball machine, scooping up five. Morton also finished with seven points, scoring three goals and adding four assists. Barrett had a game-high eight points as she rattled off six goals and dished out two assists.