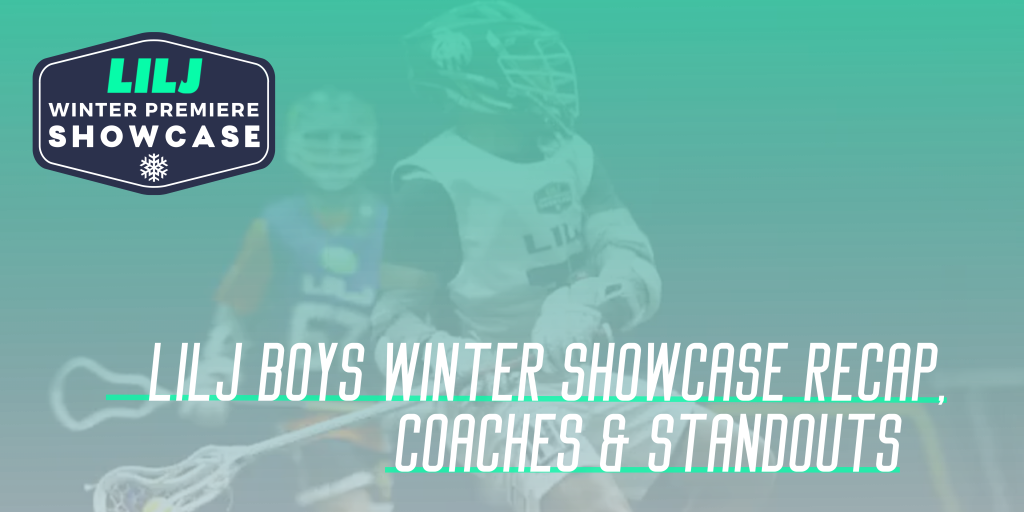 The LILJ hosted its first ever boys Premiere Winter Showcase at Stony Brook University’s indoor sports complex to wrap up the year 2021. It took place on December 20th and 21st from 7-9:30pm. The event was held for top high schoolers in the class of 2024 and 2025 as well as uncommitted players in the class of 2023. It served as a great opportunity for players who intend on playing at the collegiate level to get coaching from division I schools across the country.

The first night of the event was a two hour college level practice that focused on up tempo, high rep college drills that will prepare them to take their game to that next level. Players were broken up into groups based on their position where they worked with the coaches extensively. The long poles worked defensive oriented drills like ground balls as well as ball movement drills. On the offensive side the attacks and the midfielders got intense reps in shooting, footwork, and ball movement. The goalies were set up at their own station where they worked with the coaches on their stances and making saves while the coaches shot on them.

After getting training for two hours, the rest of the night featured games. The players were broken up into four teams so that everyone could get the maximum amount of reps and exposure. Each team played one 18 minute game to close out the night where the coaches hot an opportunity to see everyone take the field in a game setting.

On the second the night the players got some stick work in with their respective positions and then it went straight into games. Everyone was broken up into three teams and each got to play three 20 minute games with an 80 second shot clock. Playing with the shot clock helps get the players used to playing under the pressure of having a shot clock in college. Overall it was a great experience for all of the players who participated, as well as the coaches who got to see these players up close for the first time and may now have an idea of who they will be interested in recruiting when the time comes.

Over the course of the events the LILJ also partnered with Volk Brand which is a Long Island based apparel company. They set their mobile store the facility where players and parents were able to check-out and purchase products. The LILJ awarded one player each night with the Volk swag award for their performances where they received custom made Volk Brand sweatshirts. Kyle Bilello of St. Anthony’s earned the award the first night, and Jack Trovato of Islip earned it the second night.

The two nights of action was great to see so many players showcase their abilities. The LILJ wanted to highlight five players who really caught the eye of the LILJ staff for the things that they did on the field. Here are five standouts from the Premiere Winter Showcase.

Kyle Bilello of St. Anthony’s left a great impression on the LILJ over the two nights. In the first night Bilello scored three goals in just an 18 minute game. He has the ability to shoot with both hands which shows versatility, and is also a two-way player that will make plays on both sides of the ball to contribute to winning.

Islip’s Jack Trovato had an amazing Premiere Winter Showcase. The uncommitted junior just has a great knack for scoring goals in and around the crease. Trovato can make plays when it looks like there’s nothing there and can score even when he might not have the best of angles. Trovato is also great off-ball because of his IQ and his unselfishness.

Stone Evans from Cushing Academy in Connecticut, had his name said quite a few times by the LILJ. Evans is a lethal scorer and can step into his shot from long range. He is one that will always take advantage of the space that he’s given and has an extremely quick stick to get his shot off in a hurry.

Jack Skarren of Long Beach played some swarming defense throughout the two nights. Skarren is a big physical player who makes things incredibly difficult for the offense with the pressure he applies. He is great at getting the 50/50 ground balls and quickly clears the ball to the offensive zone.

Bay Shore’s Cole Kluepfel was brick wall in the games during the showcase. He has incredible reaction time and will lay his entire body on the line if necessary to make the save. Kluepfel can stop both outside shots as well as the shots around the crease makes big time saves in close games that go down to the wire.