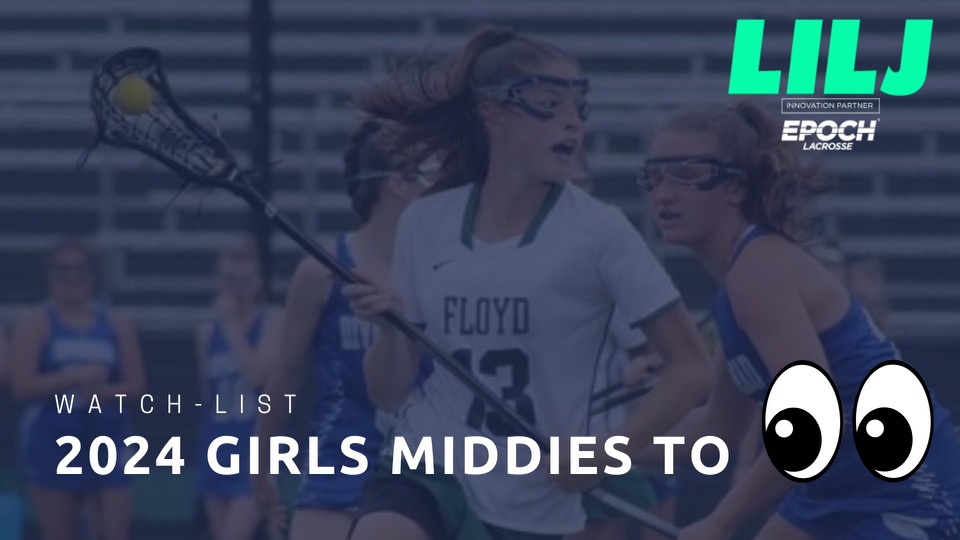 As we kick off our ten players to watch in the class of 2024 we’re starting with the middies and draw specialists. The combination of these two positions have the ability to control the game unlike any other. The pool of talent on the island in this is class extremely deep with different players bringing different skills and abilities to the table. Here are ten players from this loaded class of midfielders that the LILJ has seen that will continue to be players to watch moving forward, and be on the lookout each week as the LILJ will be touching on every position highlighting ten players to watch!

Amelia Bentley (CSH)- After having a big sophomore campaign for the Seahawks it will certainly be exciting to watch Bentley moving forward. She brings a diverse skill set to the table, giving you a little bit of everything. Watching her for CSH she has shown that she’s often the first one to the ball when boxing out her opponent on the circle, she gets inside creating plenty of 8 meter opportunities, while also being one who can facilitate to others.

Holly Hardwick (St. Anthony’s)- The Friar Hardwick plays the game with her head up and always appears to be looking for other first before looking to get her own. Covering Holly during the spring season against Darien, what stood out was her quick decision making and vision to find players inside as well as her dominance on the draw circle in the early stages.

Kayla Gilmore (William Floyd)- Gilmore’s ability to command the draw circle is second to none. Often time’s she is winning the draws to herself which allows her to dictate how an offensive possession unfolds. She is someone that you know you can count on for anything that is needed whether it’s a draw control, goal, ground ball, or caused turnover as she led her team across the board in each of those categories last spring.

Kayli Carannante (Mt. Sinai)-  The term “wheels” definitely fits Carannante’s game. She’s one of the best at clearing the ball up to the offense and can go untouched taking it all the way to the cage. When watching Kayli play whether it be the winter league, spring season, or Juniors Open, she is definitely an electrifying player to watch.

Kaylee Fravert (Sacred Heart)- Fravert really came onto the scene last winter in the box league and it carried over into the spring season and summer ball. She’s someone who is a natural goal scorer and is coming off of leading the Spartans in goals during the high school season.

Lauren Perfetto (Manhasset)- Perfetto is the perfect example of a workhorse. She can take the draw, score down the alley in transition and beat her defender one-on-one in isolation situations. In addition to her offensive prowess, Lauren will always be in the mix doing the dirty work, looking to pick up ground balls that can often be the deciding factor in a game. Seeing her over the course of different seasons, her game always goes beyond just the stat sheet as she has the intangible of never being out hustled.

McKenna Farrell (Sayville)- The Golden Flasher can be found all over the field making game changing plays that make her an unsung hero. Farrell is the type of player that will shoot out of a cannon and hunt you down if you have the ball which she has displayed consistently going back to last year’s winter league. Her intensity on defense is the type of asset that can ignite her offensive game as well as her teammates.

Megan Kenny (St. Anthony’s)- Similar to Carannante, the biggest asset to Kenny’s game is her speed. She can absolutely fly and has an insanely quick first step. Kenny might just be the fastest player on the island regardless of class. If you’re looking to clear the ball into the offensive end, Kenny is certainly one that is equipped to do so. She also has something that not everyone has which is the clutch gene.

Nicole Giannakopoulos (Manhasset)- A huge part of Manhasset’s run to the state championship game was the play of Giannakopoulos. She plays both offense and defense with a certain level of physicality and toughness which is a part of her game that won’t go unnoticed. Continuing to watch her game flourish as an upperclassman will be something special to watch.

Skylar Cohen (Friends Academy)-Another  dual threat midfielder that can change the game on either side of the field is Cohen. Defensively she makes her impact felt by into the passing lanes causing turnovers that start fast breaks for her team. Offensively she’s able to use her height to her advantage on the draw circle which allows her to win draws to herself and can score from anywhere on the field. Covering Cohen during the spring season against Locust Valley, what stood out was her long strides bringing the ball up the field and her ability to finish in traffic.