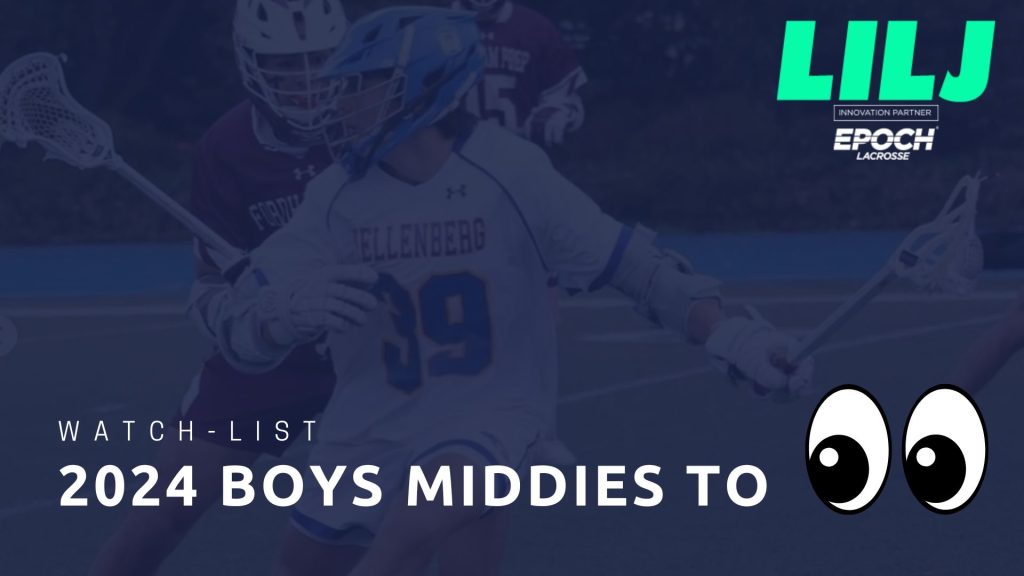 The LILJ will be highlighting ten players to watch from each position as we continue to recognize the class of 2024. This week we’re starting with the middies as they bring so many different components to the game to impact it in different ways. Here are ten middies seen by the LILJ that will continue to be players to watch moving forward as they enter their junior year, and stay tuned for next week where we’ll be highlighting ten players from a different position.

Alex Kershis (SWR)- The Wildcat Kershis made an impact for Shoreham last spring, providing a bit of a scoring punch as well as cashing in on some assists setting up his teammates. Definitely expect him to have an even more enhanced role coming up in 2023.

Brendan O’Keefe (Farmingdale)- The Daler can score from virtually anywhere on the field. He can shoot it from deep, attack from X, and shoot from directly in front of the crease. O’Keefe really made a name for himself this summer, and is surely going to continue to do so moving forward.

Carmelo Pace (Smithtown West)- A combination of a midfielder and a short-stick defensive midfielder, Pace is someone who really gets after it defensively by being physical to make his opponents feel uncomfortable. On top of being a physical defender, Pace is a very patient offensive player that lets the game come to him which leads to him being a valuable distributor of the ball.

Cole DiPietro (South Side)- DiPietro is another player who also lets the game come to him and always seems to be making the right instinct play. He’s one that can create on his own or play off the ball and find himself in open spots to be the recipient of passes from his teammates. Another key aspect to his game is his tenacity on the ride.

Jake Martini (Wantagh)- The Wantagh Warrior can blow by the defense in an eye blink, going from end to end in transition. His shiftiness and quickness doesn’t just show itself offensively. It’s shown consistently in his hustle and energy on loose balls keeping possessions alive.

Kyle Bilello (St. Anthony’s)- Bilello is the perfect of example of size not being the be-all end-all. One of the most notable and strongest parts of his game is the hesitation move he delivers when he has the ball which freezes the defense and allows him to get to the cage. He has continued to impress the eyes of many dating back to last year in the winter.

Matthew McIntee (East Islip)- What makes McIntee so dangerous is that he is a dual threat when he possesses the ball. He is just as good a distributor as he is a finisher which puts the defense in a position of having to pick their poison. A remarkable sophomore season and summer makes him must see as he enters his junior year.

Mike Anzelone (Kellenberg)- Anzelone is a player that may have flown under the radar, but the firebird found himself playing a big role last spring for Kellenberg as one of their sophomores on the varsity team. Offensively he poses as a threat due to his strong shooting ability with either hand while also moving well without the ball. He was also among the top players on his team in the ground ball department. His game and his impact will only continue to trend upwards as an upperclassman.

Pat Flaherty (Chaminade)- The Flyer is one that is always in pursuit of ground balls. His ability to get the 50/50 balls that are up for grabs can ignite an offense and create transition opportunities. Flaherty also has a shot that comes out of a cannon and can snipe it from deep.

Peter Debusschere (Chaminade)- Debusschere is another midfielder that brings multiple skills to the table. He brings a steady diet of scoring and facilitating while also being a player that you know you can count on to clear the ball. One of the intangibles that he also has in his game is the clutch gene.