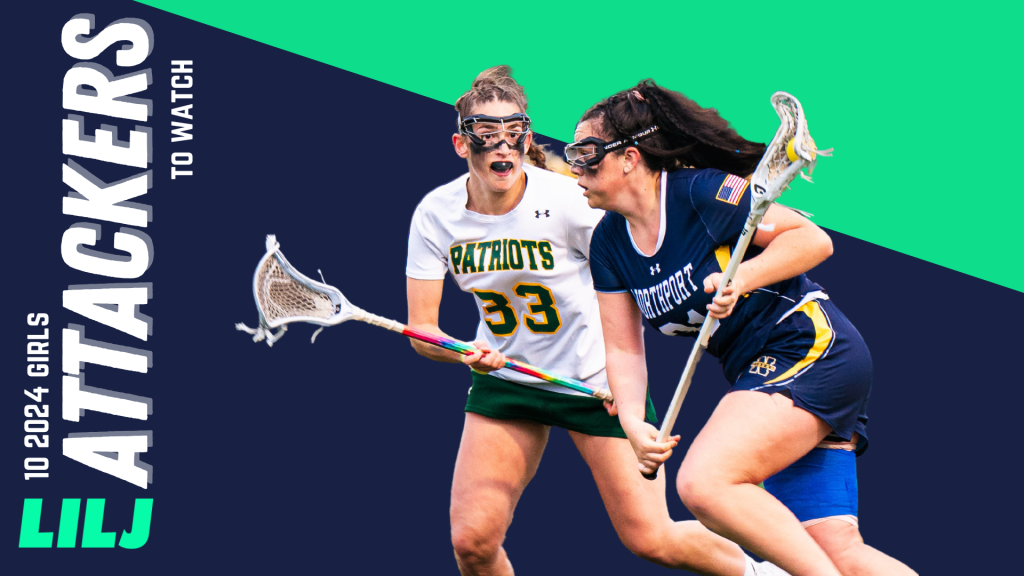 This week we’re shifting the focus to the attack unit as our ten 2024s to watch continues. Between the impeccable stick work, accurate shooting, and precise passing, so many of them were primary focal points of their team’s offense and at times put the team on their back in some of the biggest games. Here are ten top flight attackers to watch that are poised to continue to open the eyes of many in the near future.

Ashley Greene (St. Anthony’s)- At low attack Greene finds ways to get open around the crease as well as anyone. When her teammates find her there’s a high percentage chance that she’s going to capitalize on those scoring opportunities inside the eight meter. Watch out for Greene in transition as well with the speed she has in her game to take it coast to coast.

Avery Testa (South Side)- The Cyclone Testa is simply put a natural born scorer. She’s capable of finding the back of the net in bunches, scoring plenty of goals around the crease off of passes from her teammates inside. Testa is also an automatic finisher on eight meter shots.

Grace Balocca (Ward Melville)- One of Ward Melville’s most instrumental players in their 2022 season was Balocca. She’s one of the best at cutting and scoring right in front of crease. Watching her throughout the spring season Balocca always seemed to deliver in the big games showing that the moment was never too big.

Grace Mulham (Ward Melville)- A lot of the Patriot’s offense was spearheaded by Mulham who was dominant throughout the spring season. What makes her such a tough cover is that she can beat you as both a scorer and facilitator which makes the defense have to pick their poison. Mulham posted one of the best statistical sophomore seasons which builds a lot of excitement about what’s to come in 2023.

Jenna Soto (Smithtown East)- Watching Soto play, she’s one that can control the speed and tempo of a game. She’s has the vision to make precise passes to the cutters and can also beat a defender one-on-one as a strong dodger that attacks from X.

Julia Huxtable (Northport)- After a masterful sophomore campaign for the Tigers, the 2023 season for Huxtable is going to be must watch. She is supreme at orchestrating an offense, and is a great at reading the defense and making the right IQ play. She’s also incredibly tough to stop on the inside roll.

Kate Spinks (Ward Melville)- Spinks can catch and hit the back of the cage at ease whether its going high to low or hitting the corners. Watch out for Spinks on the ride creating turnovers at opportune times as well. Like her Ward Melville running mates, Spinks is another player that will be must watch going into 2023 that will surely kick it into an even higher gear.

McKenzie Moeller (Rocky Point)- Moeller was a force to be reckon with going back to last years winter league and it continued to translate for the Eagles in their 12 win season last spring. The lefty is very crafty and can weave her way through the teeth of the defense to get to her spots and put the ball through the net.

Mia LoPinto (Manhasset)- When LoPinto is around the crease and at X that’s when she is most dangerous. She can hit the cutters with precise passing leading to a lot of assists. She is equally adept at being the recipient and finishing in front of the cage. LoPinto really stepped up for Manhasset all season long last spring on their way to a state championship.

Shea Panzik (Manhasset)- Panzik can sting it from virtually anywhere on the field and is able to take contact and not allow it to deter her from scoring. She dodges with power, authority, and exudes a lot of confidence. Statistically she was among the top sophomores points and capped it off with a state title. Expect her to continue to light it up in 2023.[/vc_column_text][/vc_column][/vc_row]