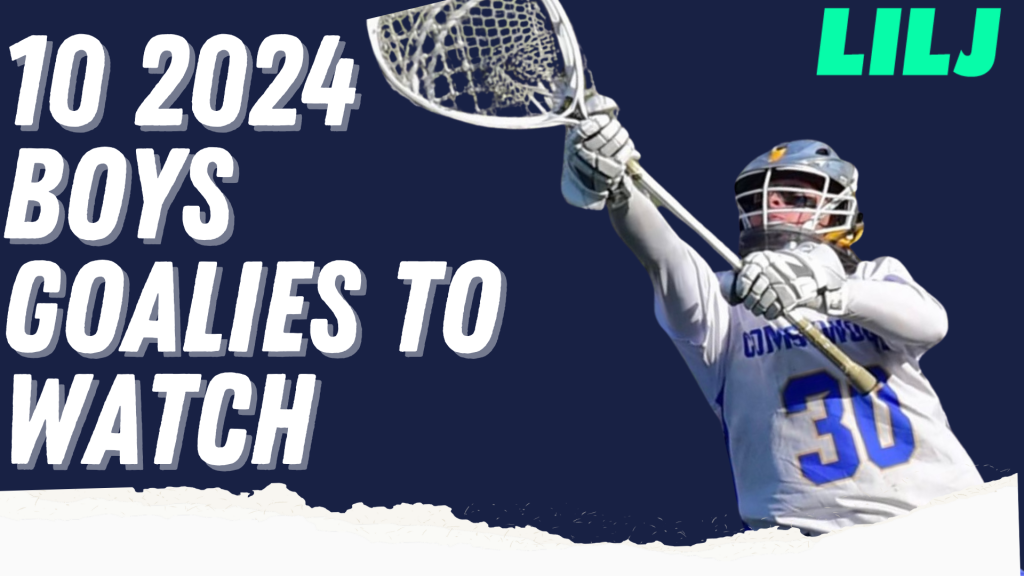 This week the LILJ highlights the last line of defense and the ones manning the pipes. Often times a goalie that’s confident and has momentum can carry a team a long way. Here are 10 goalies seen by the LILJ. Some are coming off of monster 2022 seasons, others may have seen time briefly but could be in line for a break out 2023 season as they see their roles increased.

Adam Waccholder (Comsewogue)- As one of the top goalies in the 2024 class, Waccholder showed the island just how good he was last spring. He finished with over 180 saves and showed up in some of the biggest games which helped deliver the Warriors a county title. Many eyes will continue to be on Waccholder as his game keeps ascending.

Brady Smith (Bayport)- One of the most unique players on the island is Smith due to his multi faceted game where he can play both goalie and midfield. After getting action at midfield last spring, Smith delivered the goods as a goalie over the summer and will likely be splitting the goalie duties next spring.

Caiden Lung (Lynbrook)- A player who may fly under the radar but definitely has game is Lung. He notched over 110 saves as Lynbrook’s starting goalie, and the LILJ was in attendance when he produced a dominant 16 save game against Long Beach. Lung also displayed his talents throughout the summer at events like the LI Summer Showdown.

Connor FitzGibbon (Connetquot)- Like Brady Smith, FitzGibbon provides value at multiple positions, playing both goalie and defense for the Thunderbirds. The 2023 season will likely see him getting a lot more playing time in the net where he will have a chance to really showcase his talents. In a small amount of time last season FitzGibbon has already had some highlight reel saves.

Denis Fargione (Garden City) Fargione will surely have increased playing time looking ahead to the 2023 season. After seeing some action last spring, he gave a peek into what could be in store for his junior campaign as he’ll be protecting the pipes for the reigning state champion Trojans.

Dylan Bonasera (Smithtown West)- As the starter for Smithtown West Bonasera compiled over 100 saves with a save percentage over 50%. For a team that was very strong defensively and got great goalie play on their way to the county finals, look for Bonasera to replicate his success in 2023.

Jaden Galfano (SWR)- The wildcat Galfano will continue to be the anchor of the defensive unit. After recording over 200 saves during the 2022 season, he’ll definitely look for a repeat of that in 2023. He’s had saves where he’s made the impossible possible with some unreal saves that won’t be forgotten.

Jimmy Caputo (Farmingdale)- Caputo saw time for the Dalers last spring and did an admirable job stepping up when senior Danny Seaman went down with injury. Caputo carried his strong play into the summer where he was a brick wall at events like NLI. Caputo is in store for big things for the Dalers with even more playing time in 2023.

Matt Im (Manhasset)- Down the stretch of last season Im really came through for Manhasset, showing that he can be counted on in those pressure packed situations such as the LIC. Getting an opportunity to not just play in  big games but rise to the occasion should open a lot of eyes for what he can potentially follow that up with next season.

Sean Forde (St. Anthony’s)- Forde had some memorable performances over the summer at events like the LI Summer showdown. Next season he’ll be protecting the pipes for the Friars varsity squad where he’ll have a chance to show his abilities against nationally ranked competition.