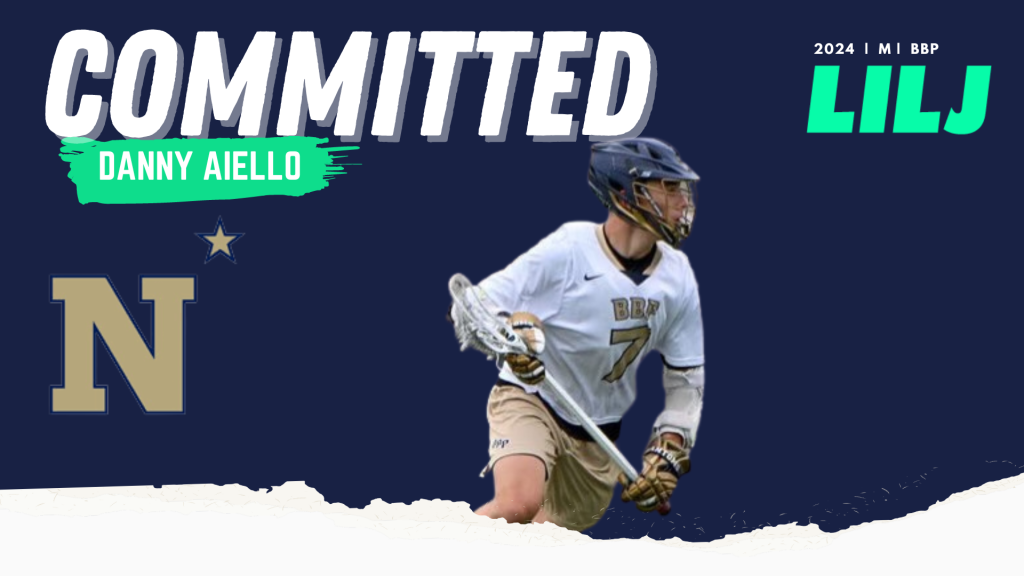 The United States Naval Academy has their share of commits from the island. One of those commits is 2024 Bayport midfielder Danny Aiello. Aiello got the call from Navy Head Coach Joe Amplo on July 1st, and it wasn’t long after that before he announced his commitment. Making the decision to commit to Navy has family ties to it. Aiello will have the opportunity to continue playing lacrosse with his older brother JJ who will begin his freshman year in the fall of 2023. Getting to play with JJ at the collegiate level was a big factor in his decision, and he’ll also be a part of something beyond just himself as he’ll be training to serve the United States.

“Getting to play with my brother was a major part of committing to Navy, also being able to serve for my country was a very big part.”

Aiello along with his brother will be the first ones in their family to serve the United States, and Aiello aims to be seen as someone who is willing to serve others and be a leader that next generation in hopes that it will lead them to want to serve as well.

Aiello’s athletic background goes beyond just the game of lacrosse. He’s a multi sport athlete who also plays football and is on a Bayport team that is absolutely loaded with talent. The Phantoms have one of the top teams on the island and are arguably the favorites to win the Long Island Championship in their conference. A lot of Aiello’s teammates on the lacrosse field are also his teammates in football, and he shared his thoughts on just how special the team is this year.

“This group of kids that we have is special and different because we’ve all been around each other our whole lives and we’ve all been saying that this is the team that’s going to win it all, especially after last year losing to Shoreham, it’s really a big revenge tour and we’re all looking to win this one.”

Aiello is looking to win a championship this fall in football, and carry the momentum on to the lacrosse field in 2023 in hopes that Phantoms can bring home a title in the spring as well. Bayport has a tremendously talented group of upperclassmen returning and will surely have a great chance to achieve big things next spring in what should be a wide open Suffolk Conference C.