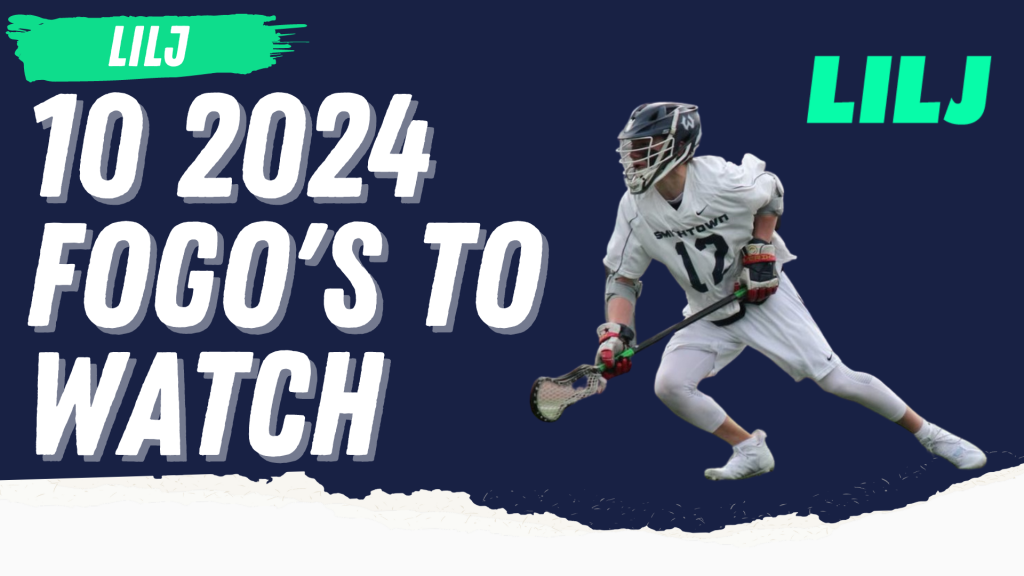 So many games are won or lost because of what happens at the face-off X and who comes away with more possessions. While some of these players are truly a face-off get-off, some of them defy the term FOGO and can stay on the field as a true midfielder and make winning plays beyond just winning the face-off. Here are 10 face-off players in the 2024 class to watch throughout the winter and into the 2023 season!

Aidan Stanton (Massapequa)- The 2023 season could potentially be a breakout year for Stanton as he gets to play on varsity. He got a taste of the varsity competition over the summer at the NLI and will be one to watch as the Chiefs return a large group of upperclassmen after their county final appearance last season.

Alex Choi (Chaminade)- The Flyer is without question one of the top face-off specialists in the 2024 class. He’s shown in big games that when his team absolutely needs a possession he can be counted on to come up with one. Choi had a big time summer at events like the NLI and LI Summer Showdown, and next season he’ll have a chance to shine on Chaminade’s varsity squad against nationally ranked competition.

Cole Gibstein (North Shore)- Gibstein was a bright spot for North Shore last season and performed well over the summer at the LI Summer Showdown. He’s also a player that can stay on the field and play midfield where he’s capable of scoring some goals. Gibstein is one of only a few retuning players for the Vikings and will once again have a big role for them in 2023.

Dennis Hodge-Boccanfuso (Bay Shore)- The game of Hodge-Boccanfuso has ascended going from the spring season to summer ball. He got a lot of reps over the summer at the NLI where he really had a good showing. Bay Shore found themselves in a lot of tight games last season and will look to turn those close defeats into wins in 2023 with Hodge-Boccanfuso winning those big face-offs late in games.

Jack Cooper (South Fork)- Cooper is more than just a face-off get-off, he’s a face-off stay-on. He left a great impression at last year’s Premier Winter Showcase. Beyond just winning a high percentage of face-offs, Cooper can go the length of the field and score in transition or find his teammates and he was good for 20 goals and 14 assists last spring. He also got to face the best of the best around the country at the 2022 Juniors Open.

Madden Murphy (Ward Melville)- Murphy was a standout player dating back to last year’s winter league, and it continued throughout the spring and into the summer. He has an extremely quick reaction time when the whistle is blown and can also take the ball down the field after winning a face-off and sting it through the net. Murphy who’s committed to Princeton will be part of a lethal face-off duo for Ward Melville with he and Michael Kitevski.

Michael Melkonian (South Side)- In 2022 Melkonian more than held his own in a conference where he was opposing some of the top FOGO’s on the island. He had games where he beat opponents that are one or two classes ahead of him and committed to top tier division 1 schools. The Cornell commit is in line for another massive year in 2023.

Michael Moon (St. Anthony’s)- Moon another FOGO that has the ability to be both a face-off specialist and a prototypical midfielder. With an expanded role and more playing time for Moon in 2023, his versatility will do wonders for the Friars. At the X he’ll be battling elite FOGO’s on a national level and has recently announced his commitment to Brown University .

Necco Cottage (Smithtown West)- Cottage has been making noise as a top FOGO since initially becoming a starter in his freshman year. In his sophomore campaign Cottage was a crucial key to Smithtown West winning 13 games and making an appearance in the Class B County Finals. Cottage will be the X factor for the Bulls next year in a wide open Class B Conference.

Will Greaves (Wantagh)- After a season that saw the Warriors win 10 games and appear in the quarter finals, Greaves will look to have another strong season at the X for Wantagh. He battled against some top line FOGO’s in his conference throughout the season and took on some the island’s best in the LI Lax Showcase. Greaves will have a great chance to replicate his success in the 2023 season.