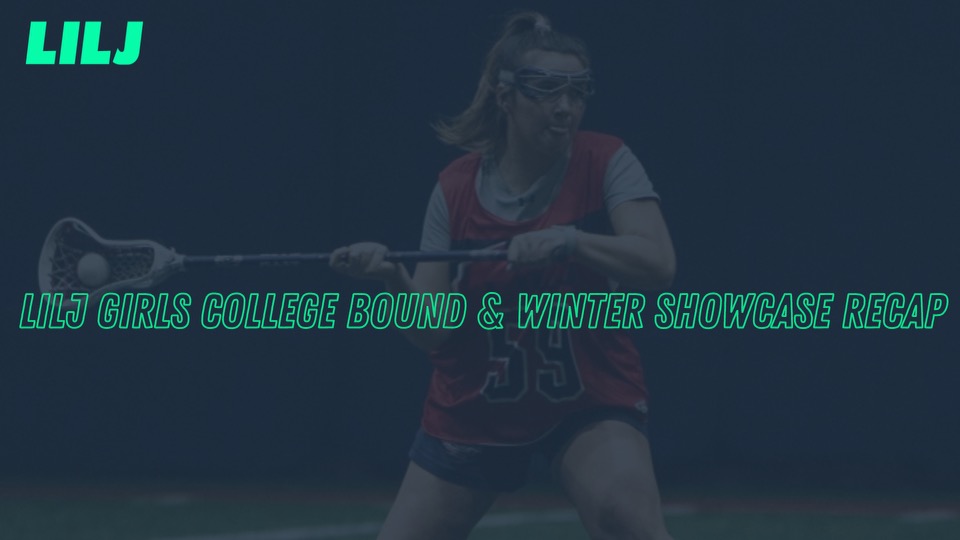 On the nights of December 19th and 20th the LILJ held the third annual College Bound Experience for middle school girls from 5:00-7:30 and the Winter Premiere Showcase for high school girls from 7:30-10:00. Both events were filled with plenty of the top players on Long Island in their respective classes with a handful of players also coming from off the island. The site was once again at Stony Brook University’s indoor facility and both events were live streamed by TME Sports. The two events had college coaches from a total of 11 division 1 schools in attendance that were coaching the girls based on position, providing instructional skills and tools for each individual across the board to help them improve and to bring out the best in them. These programs included Stony Brook, UNC, Syracuse, Stanford, UVA, Hopkins, GW, UMass, Towson, Lafayette, and Radford. The coaches from these respective programs were Joe Spallina, Greg Miceli, Sydney Pirreca, Ally Kennedy, Kerrigan Miller, Sam Giacolone, Dorrian Van Dyke, Coleen McCaffrey, Nikki Prestiano, Jana Drummond, Heather Conklin, Phil Barnes, and Caitlin Defliese. Many of the coaches from these programs have Long Island roots.

The first night primarily focused on stick work and reps in different drills with each position. Players got reps in drills which included step down shots, shooting on the run, allies and sweeps, face dodges, and ground balls, and the goalies got to see plenty of shots from various angles and worked on hand positioning and stance. Following the positional drills it transitioned into odd player breaks such as 3 on 2s, 4 on 3s, etc. In addition to the skills aspect of the game, one of the other areas that was equally important was the teaching of playing the game the right way which was emphasized by the college coaches so that players have the understanding of playing a team oriented game. The conclusion of the first night for both the College Bound Experience and the Winter Premiere Showcase saw the LILJ give away accolades to the players of the night for the way they played and the effort they showed throughout the night. In the middle school age group the players of the night were Anala Teemer (2027) of Long Beach, Emma Lembo (2028) of Farmingdale, and Arianna Focarile (2029) of Connetquot. The high school players of the night were Claudia Retzlaff (2026) of Ward Melville and Jess Black (2025) of St. Anthony’s.

On the second night of the two showcases it was all about applying the skills and tools from night one into game action with scrimmages. There were a total of three teams with each team rotating between games and each playing a total of four games which included the element of the shot clock, giving the game a collegiate feel to it as well as draws after every four goals which gave teams more of an opportunity to work on clearing the ball as well as work on the ride. Each team was coached by the incredible college coaches that were running the two night event. Throughout each game the level of talent on the field across every position was remarkable especially at the high school level in a loaded 2025 class that is getting ready to be recruited after the summer, and a 2026 class featured a high number of players that will have a big impact on their varsity teams this spring.

The College Bound players of the night were awarded to Juliana Gandolfo (2027) of St. Patrick, Thea Gallinaro (2028) of Long Beach, and Sarah Paci (2029) of Cold Spring Harbor. On the high school side the Winter Premiere Showcase players of the night were Catherine Karman (2025) from Port Washington, Jolie Weinschreider (2025) from Huntington and Taylor Gordon (2026) from Manhasset. Each player were recipients of an LILJ All-Long Island Games beanie. Continue to be on the look out for future LILJ showcases for middle and high school athletes!