The Top Long Island Men’s Lacrosse Players in the Division 1, 2 and 3 NCAA Tournament 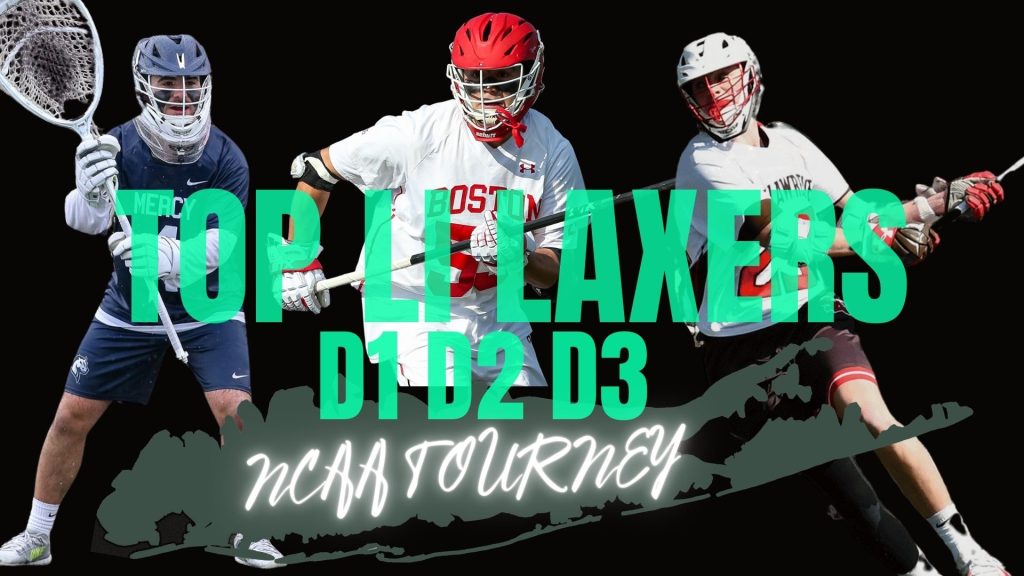 The most exciting time in college lacrosse is here, as the NCAA  tournament is upon us. The Division 1, 2 and 3 brackets were released on Sunday after all the conference title games came to a close. Throughout each bracket, a lot of teams have impact players from Long Island. Take a look at all the local stars competing in the NCAA tournament.

Brendan Krebs (Chaminade) The senior goalkeeper has been phenomenal for Manhattan this spring. Krebs has been the anchor of a back end that is top 10 in the nation in goals against and has only allowed double digit goals in 3 of the last 12 games. The Chaminade graduate has played amazing and is projected to be drafted in the upcoming PLL draft

Liam Walshe (Commack) Walshe has been one of the top offensive players for the Jaspers this season. He’s netted 26 goals on the year. He had a big role in Manhattan’s conference title with his 8 goal performance in the conference semifinal win over Marist.

Jake Nicolosi (West Islip) After being named second team All-MAAC in 2021, Nicolosi has had a great year in 2022. So far he has 21 goals and 12 assists for the Jaspers and is one of the team’s top offensive weapons.

Justin Malpica (Long Island Lutheran)- After returning from injury, Malpica has had 8 points in 5 games. He had a hattrick in the 8-7 conference championship win over St Bonaventure.

Ryan Aughvain (North Shore)- Aughavin has registered 28 goals and 13 assists this season. He’s ranked second on the team in points and will be crucial in Brown’s tournament run.

Colin Hart (Garden City)- The junior defender has played a big role in Brown’s success this year. He’s third on the team in caused turnovers and has been a ground ball machine, ranking fourth in that category among his teammates.

Petey Lasella- (Rocky Point)- Lasella has established himself as one of the top FOGO’s in the country. He’s ranked 6th in the nation in faceoff percentage. He’ll be a key factor in the defending champs run this May.

Tyler Sandoval (Chaminade)- A terrific fogo who has had a great year for the Tigers. He won 19 of 31 face-offs against Rutgers and was 18 for 28 with 11 ground balls against Yale.

Alexander Vardaro (Hewlett)- The 5’9 midfielder has been outstanding for Princeton. Putting up 21 goals and 15 assists, he’s one of the top offensive threats for this Tigers offense.

The Long Island attack trio highlights the BU offense. Vince D’Alto (Kings Park), Louis Perfetto (Manhasset) and Timmy Ley (Massapequa) have all been amazing. They are the team’s top three scorers and have put on a show all year long. Keep an eye out for this incredible attack unit during the NCAA tournament.

Roy Meyer (Chaminade)- One of the best LSM’s in America. Meyer won patriot league defensive player of the year and has dominated all season.

Conor Calderone (Smithtown West)- The primary faceoff specialist for the Terriers. He is 54 percent from the X on the season.

Steven Cuccurullo (Smithtown East)- Harvard’s starting fogo who will be a big factor in the Crimsons tournament run.

Ethan Rall (Islip)- He was just named First Team All Big Ten. The 5’9 LSM has created problems for offensive players night in and night out causing 26 turnovers.

The Big Red features a long pole duo of two Long Island natives, Joseph Bartolotto (Miller Place) and Gavin Adler (Hewlett). They lead the team in caused turnovers and have been tremondus defensively for the seventh seeded Big Red.

Hugh Kellher (MacArthur)- The sophomore midfielder has been a matchup nightmare offensively. Kellher has 18 goals on the year and has dished out 6 assists.

Alex Mazzone (Ward Melville)- An impactful defender for the second seeded Hoyas. Mazzone has contributed 19 caused turnovers and has been a reliable defender for Georgetown.

Here’s the link to the Division One selection show: https://www.youtube.com/watch?v=h67wcgAvTCQ

Joseph Duchnowski (St Anthony’s)- One of the most prolific scorers in division two lacrosse and is the leader of this Adelphi team who just won the NE10 title over Le Moyne.

Edward Perlistien (Lynbrook) – Over 60 percent at the faceoff X. He’s been extremely efficient and a big reason why Adelphi has had so much success.

Dylan Renner (Mineola)- He has a save percentage of 58 and only let up 2 goals against Le Moyne in the NE10 title which was their lowest output since 1990.

Kyle Stienback (Garden City)- A dynamic offensive threat who’s put up 30+ goals and has been very productive for the Panthers.

Tommy Umano (Seaford)- The 5’6 goaltender has been a brick wall all year, only allowing 8 goals per game. Umano also had 19 saves in the conference title victory.

Dominic Scorcia (Carey)- Scorcia has 44 goals and has torn up opposing defenses all season long.

PJ Agrios (Kellenberg)- Agrios is at over 60 percent from the X and has been consistent all year for the Mavericks.

Danny Riley (Smithtown West)- Last year Riley was recognized as an All American and this year his offensive production hasn’t stopped. He’s found the back of the net 36 times and has a total of 48 points. He’s one of the top players for an extremely talented Wingate offense.

Mike Dilegge (Bay Shore)- Dilegge is the starting LSM and has been a force for the Bulldogs this season.

Here’s the link to the Division Two selection show: https://www.ncaa.com/video/lacrosse-men/2022-05-08/dii-mens-lacrosse-2022-selection-show

Jake Sexton (Chaminade)- One of the captains for Wesleyan and the leader of an explosive attack unit. Sexton is second on the team with 43 goals on the season.

Colin Hanley (Chaminade)-  Hanley is the starting goalie for Wesleyan and has been outstanding in helping the Cardinals get back to the NCAA tournament.

Gavin Pappas (Garden City)- The junior midfielder has been a great contributor to the Big Red this season. Pappas has 20 goals to his name on the year.

Joe Cawley (Syosset)-  One of the Ducks’ top defenseman. First team All Conference in 2021 and has been dominant once again with 27 caused turnovers.

Tyler Ryan (Chaminade)- Ryan has tallied 60 points during his senior campaign. He has showcased his feeding ability as he leads the Ducks with 37 assists.

Parker Riley (West Islip)- The freshman attackmen has scored 37 goals on the year, 18 of which have come in his last 4 games. Riley also registered a 7 point performance in the Skyline championship.

Patrick Schnell (Jericho)- One of the top midfielders for Maritime and he has 21 assists on the year which leads the team.

Michael Monahan (Sayville)-  Skyline conference rookie of the year. Posted a 9-1 record when starting the game in goal.

Sean Baudo (St Anthony’s)- 40 goals so far this season which is second on the team. He’s a key part to a really talented Catholic team who’s won back to back Landmark championships.

Tynan Hillery (St Anthony’s)- He was the conference defensive player of the year in 2021. Hillery has been a lockdown defender once again in 2022.

Cameron Dunn (South Side)- Dunn has netted 29 goals and also has 10 helpers on the year.

Connor Garzone (Chaminade)- Started all 18 games at goalie for the Jumbos. Garzone has recorded over 200 saves on the season.

Dillion McManus (Half Hollow Hills West)- One of the top scorers in division three lacrosse. He has 49 goals on the year and had a 5 goal performance in the AEC title game.

Teddy Bentley (Cold Spring Harbor)- The defensive midfielder is a captain for the generals and has produced a ton with 55 ground balls.

Zak Jones (Westhampton Beach)- 28 goals on the year which leads the team. Jones will play a big role for Cortland in the NCAA tournament.

Troy Morris (Long Beach)- Morris collected 41 points on the season and has been a key contributor to the Red Dragons offense.

Chris Jordan (Garden City)- Jordan has been a superstar for the Saints this season. He’s led a powerful offense by tallying 38 goals and 43 assists.

PJ Clementi (Harborfields)- The senior attackmen has been amazing offensively. Clementi is a very dynamic player who has 59 points on the year.

Zach Gagon (Comsewogue)- The senior defenseman has started every game and is a staple of RIT’s defense. Gagon recorded 15 caused turnovers and picked up 31 ground balls during the season.

Here’s the link to the Division Three selection show: https://www.youtube.com/watch?v=YSBYxFgmRIw