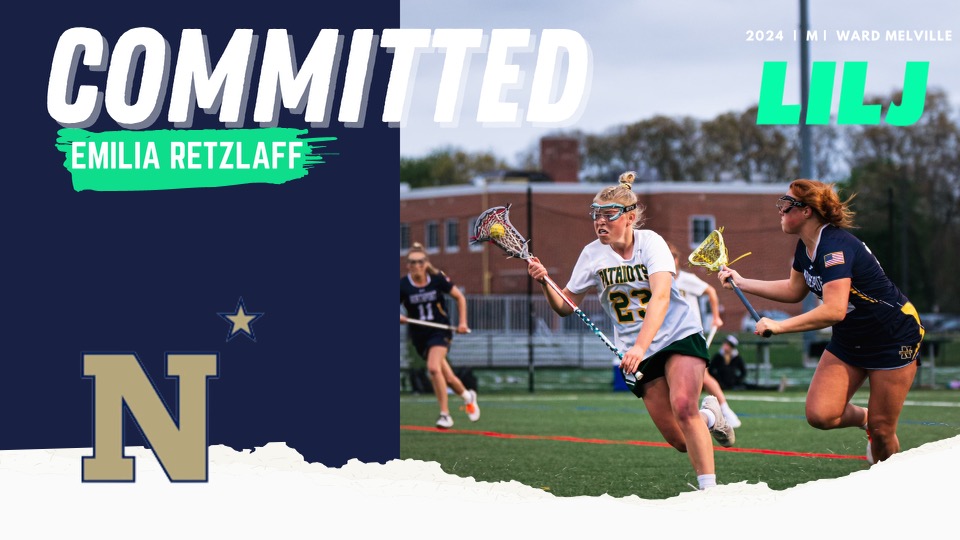 One of the first 2024s to be taken off the board and commit to college is Ward Melville midfielder Emilia Retzlaff.  She recently announced her commitment to continue her lacrosse and academic career at the United States Naval Academy where she will also be training to serve the United States. The journey for Retzlaff to becoming a top flight two-way midfielder on the island began at the end of the fifth grade thanks to the dad of Grace Mulham who is one of Retzlaff’s best friends and current teammates.

“Her dad used to be the head coach for our young PAL team, and I remember him saying ‘Emilia you should pick up a stick, just try it.'”

Retzlaff’s main sport growing up was soccer which she also played with Mulham. The suggestion made by Mulham’s dad to give lacrosse a shot turned into her developing a strong passion and love for the game.

During her recruiting process Retzlaff did go on some visits to different schools to tour various campuses, but always had it in the back of her mind that Navy was the place that she wanted to be. Uniquely, Retzlaff doesn’t have any family members that currently or have previously served the country in a branch of service. Being the first in her family to have an opportunity to serve in the military is something that she sees as a chance to be a leader for her younger siblings and cousins in which they can also follow that same path.

“I think I’m going to start leading the path and hopefully maybe my siblings will follow or my cousins, but that’s always been something I wanted to do. I chose Navy honestly because I wanted to be a part of something bigger than myself, and to become a better leader and inspire the future generations to come to these service academies and serve and be a part of something bigger than themselves.”

Retzlaff still has two seasons remaining with Ward Melville before she heads to Navy, and she and the rest of the Patriots are knocking on the door of capturing a Long Island Championship and possibly a state championship. Last year they made it to the county finals and were on the verge of appearing in the LIC. Like last year, Retzlaff will surely play a major role in the success of Ward Melville over the next two years for a team that might be the favorites to come out of Suffolk’s Class A Conference.

Check out the full interview down below in this weeks committed feature. Retzlaff also shares about what she’s looking to pursue academically at Navy as well as her background as a multi sport athlete.