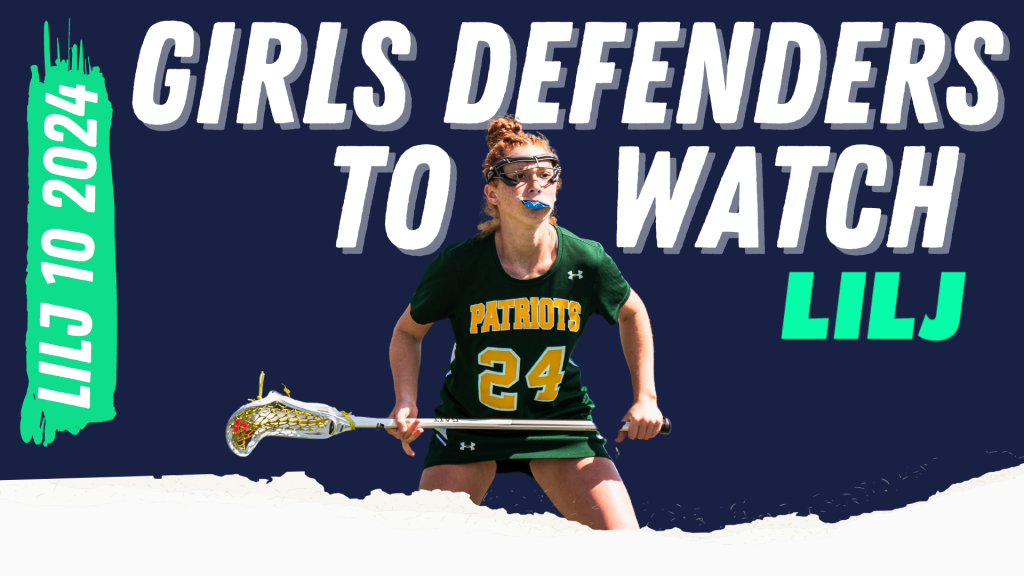 In the second week of the LILJ’s ten 2024 players to watch, we’re shifting to the defensive side of the ball. The skills and work ethic that they bring to the table were shown throughout both the high school season as well as in summer ball, and it won’t be long before they make the commitment of where they’ll be playing the next four years after high school. Check out ten defenders that will continue to open the eyes of many when they take the field as upperclassmen.

Amanda Paci (St. Anthony’s)- Seen as the top defender on the island in this class by many, Paci might also be the top 2024 defender in the country. She is without a doubt the one you want guarding the opponents top offensive player. Between her footwork, deflecting eight meter shots, and her anticipation to pick off passes, Paci brings everything to the table. She can also fly down the field which is shown time and time again in her ability to convert a successful clear.

Carley Mullins (Islip)- As one of the taller defenders on the island Mullins is very difficult for opponents to get by. When trying to get inside the eight meter Mullins’ presence will quickly force them out of their comfort zone. She also has exceptional vision up the field to make the home run pass to execute the clear. While playing defense for her club team Mullins can also be seen playing midfield for Islip where she provides a steady dose of scoring and distributing.

Courtney Thornton (Sayville)- Thornton brings a physical presence as a one-on-one defender both on and off ball. When guarding players off-ball, her physicality and reading plays can often force the offense to have to look for other options to get the ball to. Thornton also has a nose for the ground balls.

Daniella Stek (Seaford)- The Seaford Viking was such a valuable player for them during their 13 win season last spring. Stek brings plenty of versatility to her defense game which includes being a ground ball machine, backing up shots to create offensive possessions, and rebounding shots to take it the other way.

Emily Ambrozy (St. Anthony’s) Ambrozy is a meistro at causing turnovers which come in a variety of ways. Combine timing and being able to analyze offensive plays put her in position to cut off passes give the ball back to the offense. Ambrozy’s timing also leads to her coming away with a lot of deflections to break up the offensive play.

Mabel Overbeck (Garden City)- Another tall defender is Overbeck who’s size and length is a big asset to her game. When she has her stick in the air there’s a very good chance she’ll knock down the pass or outright intercept it. While she’s primarily a defender Overbeck can play multiple positions which makes her such an integral component to the Trojans.

Madeleine Chun (Manhasset)- One of Manhasset’s premier defenders, Chun is lock down when guarding the ball. Her footwork makes her tremendous at sliding so she’s always attached to her opponent. Chun’s slide also makes her great help defender and she can quickly close any open lanes to the cage.

Morgan Harloff  (South Side)- Covering Harloff going back to the 2021 spring season, she is consistently taking on the opposing teams primary offensive weapon. She is a lock down on-ball defender who also impacts the game by her ability to slow down or stop transition plays and make teams execute in the half field. Harloff can switch, flight through screens, and also takes draws making her a multifaceted player.

Olivia Comerford (Ward Melville)- Comerford is another defender with electric lateral quickness, but she also brings the element of being very feisty and scrappy. Watching Olivia during the high school season she showed on multiple occasions her relentlessness digging up and ground balls, and chasing players down to make that game-altering check from behind.

Rosalie Haffner (Sacred Heart)- The Spartan Haffner is another defender that you know you can trust to clear the ball up to the offense in transition. She protects the crease at a high level and is persistent on going after the ground balls that are up for grabs.