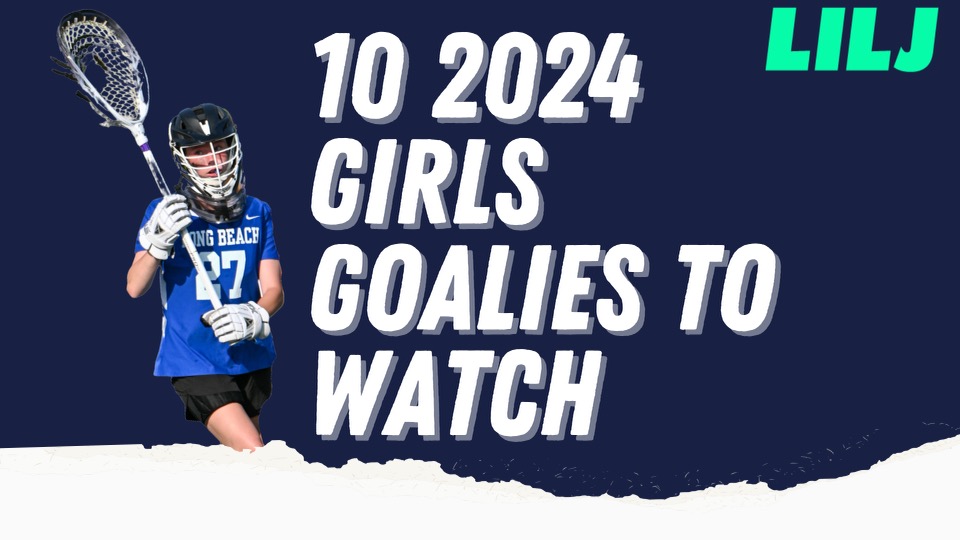 Recognizing the 2024 goalie class, the LILJ has seen a number of goalies that have had remarkable seasons and continued it throughout the summer. Some of them already have a couple of years under their belts as a full time starter, while others may have shared the goalie duties and can see their playing time increased next spring. Here are 10 goalies to watch that are in line for big things in 2023!

Ashley Langdon (ESM)- Langdon is one of the more athletic goalies on the island, showing flexibility and agility. Not only does she react quickly to make the initial save, but she’s equally adept and alert at stopping those second and third opportunities off of rebounds. Langdon shined throughout the summer at events such as the Juniors Open.

Ava Carrillo (Ward Melville)- Carrillo has been making noise as one of the top goalies in the 24 class going back to when she was a freshman starting for the Patriots. In 2022 she finished with an incredible 125 saves for a Ward Melville team that went 16-2. Year three for Carrillo is sure to be another season where she lights it up.

Ava Ceglia (Syosset)- The Braves will be backed by Ceglia manning the pipes who has been a beast wherever she’s played. Ceglia has consistently been a standout player whether it’s the box league, the high school season, or the juniors open. She was huge in the county final last season, holding a dynamic Massapequa team to just seven goals. There’s no question Ceglia will be a vital piece to Syosset and what they aim to achieve next spring.

Emily Backlin (Long Beach)- Backlin will be one of the backbones of the defense for the Marines and is another goalie that after splitting time last year will likely rise to an increased role on her team. Despite not playing the entirety of games last year she recorded nearly 60 saves with a percentage over 50%. Expect those save totals to only rise as the playing time goes up.

Grace McDonald (Smithtown East)- McDonald is coming off of a tremendous 2022 season in which tallied a whopping 138 saves. The Smithtown East Bull will have a great opportunity to carry the momentum forward into  the 2023 spring season for a team that will be in contention to come out of Suffolk’s Class A Conference.

Lexi Zenk (St. Anthony’s)- The Friar Zenk continuously proves how elite she is. Beside’s just having the skill and the talent, she has the fortitude to step up in some of the biggest games anyone could play in. Zenk was the starting goalie for St. Anthony’s in championship game to clinch the CHSAA title and recorded 10 saves with only five goals allowed. The future is tremendously bright for the UNC commit.

Mia Nowlan (Comsewogue)- With Nowlan potentially getting the nod as Comsewogue’s starting goalie this will be a great opportunity to watch her in an elevated role. Getting a chance to cover Nowlan in the upcoming winter league will show what’s in store for the type of season she could have in the spring season.

Niamh Pfaff (Garden City)- Pfaff is surely going to be a goalie to watch as we approach the winter league and looking ahead to the spring season. After seeing plenty of time last year for Garden City Pfaff will likely have an enhanced role in 2023. She brings plenty of athleticism to the table, having quick reactions and reflexes to come up with saves. Pfaff is also not afraid to step out and intercept passes to force turnovers.

Shannon Alden (Bayport)- Watching Alden dating back to last year’s winter league, she exemplifies the goalie depth that the Phantoms have and is surely going to have an impact on the varsity team in 2023. Alden can elevate to match sticks and extend her body down low to save shots on the ground as well as anyone.

Stella Quilty (St. Anthony’s)- Quilty has consistently played at high a level whether it was during the high school season, or throughout the summer at events like the Juniors Open. Anyone looking to shoot it low with Quilty in net will have a hard time getting it passed her. The Rutgers commit will have an opportunity to make a lot of noise on Friars varsity squad in 2023.